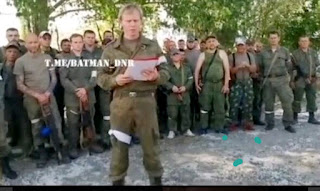 Russian army are presently engaged in a  battle to take control of the entire Donbas. Parts of the region were taken over by Putin in 2014 and turned into the pseudo-states of the Donetsk People’s Republic (DNR) and the Luhansk People’s Republic (LNR). High esistance from Ukrainian forces has inflicted heavy casualties on the Russian army, with alot of estimates claiming over 32,000 fighters losing their lived since the outbreak of the war.

Moscow has avoided using a total military mobilisation to increase the number of its soldiers, instead choosing to call up conscripts from its occupied eastern Ukrainian boarders.

As a result of this, many citizens from the DNR and LNR have now been enrolled into the Russian army and forced to serve for long time on the war

In what appears to be fury among the conscripts, one officer from a drafted military unit from the DNR publicly have  called on president Putin to address their grievances in a video.

The Army from  113th Rifle Regiment of the DNR explained: “We have been based for practically the entire war on the front line in Kherson oblast without a break.

“Our team has had to deal with hunger and freezing conditions.

“For significant periods of time we have had no access to medical, material or food supplies.”

He continued: “Mobilisation was conducted without the necessary medical checks.

“Among those in our unit, I see people who according to the law of the Donetsk People’s Republic should not have been called up in the first place.

“There are people with chronic illnesses and physical ailments.

“Our long uninterrupted service at the front raises many questions which our commanders ignore.