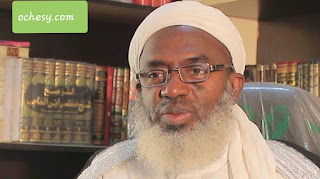 An online reporting media has said the intervention  of Seik Gumi has freed at least eleven of the Kaduna-Abuja train Kidnap victims.

The report written and published in Delano media reads as follows:

“11 out of the sixty persons kidnapped following the March 28 Abuja-Kaduna train attack have regained their freedom.

Among those who regained their freedom are six females and five males, although the circumstance of their release is yet to be clear.

The 11 victims are said to have been flown to the nation’s capital, Abuja.

This was revealed by Mallam Tukur Mamu, the spokesman for Kaduna-based Islamic cleric Sheikh Ahmad Gumi, who has been involved in the negotiations for the victims’ release.

The victims were liberated on Saturday afternoon, June 11, in a jungle and taken to Abuja, Nigeria’s capital, according to him.

He explained that the 11 victims were released due to their health in order for them to receive immediate medical attention.

According to Mamu, the male victims were freed due to health concerns as part of the negotiation team’s request, while the women who are among the most vulnerable were released as part of the abductors’ agreement.

He also noted that the terrorists freed the male detainees due to health concerns, and the ladies were among the most vulnerable in captivity.

The victims were among the passengers of the Abuja-Kaduna bound train that was attacked by terrorists at Dutse forest in Chikun Local Government Area of Kaduna State.”