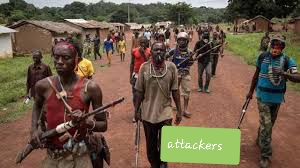 In the early hour of today, fulani herdsmen in their numbers  stormed Okporikpo and Igama village of Okpokwu LG area of Benue State, leaving at least 30  persons dead while other persons are reportedly missing.

According to Emmanuel Idango, the fulanis invaded the two villages at early hours and were shooting sporadically from different directions, causing panic and unexplainable confusion for the inhabitants.

“They gunned down any one on sight, while we have recovered 30 dead bodies, others have been taken to different hospitals and are currently nursing seriouse wounds.” Idango told ochesy.

When asked about what could angered the herders before going to this extent, idango exclaimed- “it must be nothing rather, Jihadist fulanis who wants Christian communities to be extinct so they can take lands and graze their cows freely!”

“We are peaceful people and have not done any evil to strangers, I wonder how would an ethnic group be such wicked and attack others in their own land without mercy.” Emmanuel added in tears.

The senator representing the region, Senator Abbah Moro have condemned the attack.

“The attack on Okporikpo and Igama Communities of Edumoga in Okpokwu LG in the early hours of today, June 12, 2022, leading to wanton destruction of lives and properties stands condemned.” Senstor Abah Moro stated.

“I sympathize with the victims of the barbaric attack and call on security agents to go after and bring to book the perpetrators of the heinous crime.” He added.