In what appears to be fulfilment of “sell your cloak and buy a sward” as instructed by christ, a woman decided to go to church today with a dane gun.

It is no longer  news that worshipers are freely killed in Nigeria by fulanis, a tribe in Nigeria who are predominantly herders and muslims in faith.

Years back after president Buhari (a Fulani man) took over power,  the Fulanis started kidnapping as a business.

Kidnapping is an inhuman business carried out in Nigeria by Fulanis who targets Christians, where people are  forcefully taken from their loved ones to be killed or released later after payment of ransome.

Recently, the hatred for Christians by fulani (mostly muslims) have developed to attacking churches and opening fire on worshipers. The most deadly one was carried out in Owo, ondo state where over 50 Christians where killed in a catholic church.

This trend has caused panic of upsurge in religious crisis in the country and many Christians are now living in fear.

A woman who does not want to be taken unaware have taken her dane gun to church today and according to analysts, more Christians may follow suit.

See her picture below. 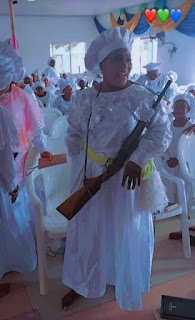