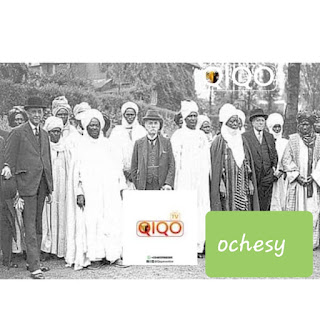 Qiqo tv have written out a yet undiscovered history of federal republic of Nigeria that is getting people talking. The history as written by the media company reads:

“To understand Nigeria you need to know the history to explain the politics.

When the British arrived in what became Northern Nigeria, there were by then lets say for arguments sake two nations ruling the North predominantly the Fulani and then also the Indigenous Hausa, the latter of which the Hausa kingdoms were constantly being attacked by the Fulani who are conquers by nature. The British to keep a balance assisted the Hausa and with their help confronted the Fulani.

The Fulani understanding conquest took to their new masters the British and in return for their new found compliant attitude Lord Lugard made every Emir in every town in the north a Fulani, inadvertently giving power back to the Fulani. (I wonder if this is where the phrase “the only thing Nigeria understands is war” stems from).

Then in 1914 for financial reasons the British amalgamated the Northern Nigeria Protectorate with the Southern Protectorates, now these were entirely two very different regions, as the southern protectorate wasn’t a conquered region it was a democratic area of many nations that had been developed over thousands of years of trading with foreign lands (the southern protectorate agreed upon to protect trading) and was religiously predominantly Judea Christian and in every sense was far more developed than the north in every aspect; education, standard of living etc.. following the amalgamation there was a great need in the north for jobs only the southerners could really do for development of the country like railways, education etc..

So they were sent to the north, however they were still the foreigners and they could never fit in, understandably deep seated bad feelings embedded itself as the Northerners felt the Southerners were lauding their social standing over them and the Southerners could never fit into the social/political system as it was not designed to do so. (Oil doesn’t mix with water). Now the British have left following independence the Fulani are still conquering as is there nature by political means.

To explain in full detail one must read: Historical background of Northern Nigeria in the Report of the Justice G.C.M Onyiuke Tribunal 1966.

For a century before the advent of British administration in Nigeria, the Fulani provided the ruling class of most of Northern Nigeria.

The notable exception is the Bornu Emirate to the north/east which is inhabited by the Kanuri. What we now know as the provinces of Sokoto, Gwandu, Katsina, Kano, Zaria, Bauchi, Adamawa, Plateau and Niger fell under varying degrees to the influence of the Fulani aristocracy. Northern Nigeria was by no means a void nor was it without history. We do not propose to delve into ancient history. This is hardly a useful exercise here. Suffice it to say that British expansion met established Hausa states at varying levels of development and prosperity.

They were in all at this stage 14 Hausa states which comprised, Darua, Kano, Zaria, Gobir, Katsina, Rono and Biram (the Hausa Bakwai or legitimate 7 states); Zamfara, Kebbi, Nupe, Gbagyi, Gauri, Ilorin (Yoruba) and Kwararafa (the banza Bakwai or upstart seven which developed to the south and west of the original group). Each state had its own traditions and legends of origin and at varying degrees had embraced or come under the influence of Islam. It had been said that it would be strictly incorrect to refer to these Hausa states as if they belong to the same ethnic group. They were people who spoke the Hausa language and adopted the Hausa mode of dress and life generally.

When the 19th century opened, the Fulani appeared to be the predominant race in the Sudan. Fulani is the Hausa name for the people who call themselves Fulbe. They themselves made a distinction between the Cattle Fulani and the Town Fulani; The latter included the aristocratic families such as Torobe. The origin of these people is less than clear. What is more certain, however is that by the 16th century, there was a steady movement of those Fulani people from the region now known as Senegal towards the East through Messina and the Hausa states toward Chad and Adamawa and beyond.

From the rank of the Fulani the great religious leaders of the 18th and 19th centuries came in the Sudan to launch a series of religious movements which, as often happened in Islam, passed into political wars. We are here concerned with the religious movement that affected Northern Nigeria.

Usman Dan Fodio who was subsequently known as Shehu or Sheikh was born a Fulani in the Hausa state of Gobir about 1750. He was brought up with his brother Abdullahi as a strict Muslim and after studying for some years in Agades he felt the call to dedicate his life to teaching the faith. On his return from Agades, Dan Fodio acted as a tutor to the Sarkin Gobir’s two sons in Alkaluwa. One of these was Yunfa who was later to succeed to the throne.

In the interval before his accession Dan Fodio felt obliged to withdraw from Alkaluwa giving his reason the reversion to pagan practices by the court on the hostility shown towards the Muslim faith. When Yunfa finally became king, he sort out his old tutor and encouraged him to resume his itinerant preaching. Dan Fodio soon fell out with the new king and in 1804 was driven to flight. A party rallied to him, defeated the king, and proclaimed Dan Fodio, (now their leader) Sarkin Musulmi Commander of the Faithful, a title which is still held by his successor, the Sultan of Sokoto. A general movement broke out all over the area which later became Northern Nigeria.

The line of cleavage did not run clear between the Fulani and the Hausas but the Fulani who provided the energy and ambition to the apparent religious cause. Everywhere followers of the Shehu, appointed or self-appointed, received flags from his hands. They called upon the faithful to drive out the old Hausa or as they were called the Habe dynasties and then set themselves up in turn as rulers subject to Sokoto which had become the seat of the Fulani authority in 1810. Not only was this change accomplished in the old Hausa kingdoms but in the impetus of the movement, Fulani leaders pushed the boundaries of Islam south, incorporating in varying degrees many pagan tribes.

As indicated earlier the movement for religious revival degenerated into a political war of conquest. Consequently the son of the Shehu, Bello, who succeeded him became more interested in the military and political results of the religious revival than in spreading the faith.

The record for Fulani success had some important exceptions. The ancient Kanuri kingdom of Bornu with its capital near Lake Chad and itself Moslem, threw back the Fulani invaders. The holy man of Bornu, El-Kanemi, taunted Shehu Usman Dan Fodio with having turned a war of religion into one of conquest and with attacking his co-religionists.

El-Kanemi frankly admitted that some of his Chiefs had relapsed into heathenism, that the Alkalis or Moslem judges sometimes took bribes and women went unveiled; but he argued that this was not sufficient excuse for war. This opposition from Bornu, as we shall see when we come to consider the pattern and the spread of the atrocities in the 1966 program, seems to appear its head once again in 1966. Bello in his defense of his fathers action justified mainly on the ground of proselytism. Said he:

@And the second reason for our Jihad was that they were heathens, the people of Hausa. A further reason for the war was that we sought to aid truth against falsehood and to strengthen Islam. For to make war on the heathen from the beginning, if one has the power is declared a duty. So also it is it’s a duty to make war on those heathen who have converted to Islam and later have reverted to heathenism, if one has the power. In truth we stated at the beginning of this that the Hausa chiefs, their people and their mallams were evil doers”.

At the beginning of the present century, the British administration emerged in Northern Nigeria. They based their title on conquest. Sir Frederick Lugard, the first British governor of Northern Nigeria asserted in one of his early reports as follows:- “The Fulani hold their suzerainty by right of conquest. I can myself see no injustice in the transfer of the suzerainty thus acquired to the British by the same right of conquest”.

The Fulani caste seemed to have accepted their masters without much resistance. The explanation of this, it is said, was due in part to the insecurity of the Fulani position in relation to their subjects who had shown little loyalty to the Fulani during the period of their confrontation with the British.

The British, by force of arms, broke the Fulani ascendancy in the north, but by twist of irony, restore that supremacy under the system of indirect rule. Once the suzerainty of the British was accepted by the Fulani, the British were content to allow an even to support and consolidate the authority of the Fulani Emirs in their various Emirates.

It is generally accepted that in 1966 there were over 2 million Easterners in Northern Nigeria. Their presence in the north it was all connected with the amalgamation of northern and southern Nigeria in 1914 by the British. Unfortunately, although they were there in such large numbers and for so long and filled a very important position in the economic and political development of Northern Nigeria, they were never fully integrated into the mainstream of life in society. They became what sociologist call a privilege pariah class- ‘privileged’ because participating in and benefiting from the modernizing sectors of the economy to which the northern Muslims had been induced to turn their back.

Their standard of living was higher than the normal run of life of most northerners. They were ‘pariah’ because they were kept outside the rank system of society. Because of the attitude of northern Muslims to modern education, the administrators of the day were compelled to employ these Easterners though they disliked having them. It cut across the policy of the day of separating the north from the south.

‘Divide and rule’ is a cliché which is grown odious by being frequently used for all situations weather appropriate or not; but it really enshrined an important gem of British colonial policy. The north and south were amalgamated in 1914 ostensibly under One government yet the ‘writ’ of the legislative Council in Lagos did not run into Northern Nigeria. The British colonial administrator reserved the right to legislate alone for the north until the Richards constitution of 1946.

Easterners is and in fact other non-northerners were restricted in most of the towns to strangers quarters called Sabon Gari. In these circumstance the Easterners and Northerners grew up a separate communities. Dissimilarities were accentuated and old prejudices hardened. Since 1950 attempts, especially by southerners, were made to bridge the gap but such attempts were regarded by the northern aristocracy as an imposition from the south and were smashed.

The emergence of political parties in Nigeria did not improve matters in the north either. As far as the north was concerned it did not succeed in breaking down the old barriers. The dominant political party in the north (the Northern People’s Congress) started off as a party of native administration functionaries and appointees of the Emir‘s and never really went beyond that.

It is our view that the foundation of Nigeria contain the seeds of her own destruction.” QIQOTV wrote.