Politics to many is a game of betrayal where you need to bring another person down in order for you to elevate. This is done through initial loyalty to those called political fathers until full confidence and trust is built.

In the case of prof Osibajor, he was a political son to Bola Ahmed Tinibu who fathers many in the western Nigeria politically.

Tinibu who has being eyeing the presidential ticket for 2023 was said to be expecting his political son whom he brought to lime light and have served for 7 years as vice president of federal republic of Nigeria to support him but to the shock of his life, Osibajor publicly declared to be the flag bearer of the APC presidential ticket.

From the look among the Yorubas and other ethnic groups, Osibajor is now gathering momentum and the support he needs to bear the presidential flag of the APC come 2023.

While this is a welcome development to many Nigerians to have such an extensive educated man to lead the country of over  200 million people, others are seeing it as a betrayal and have tagged the vice president as  “Judah that betrayed his master” for declaring his ambition amidst his master’s.

Our reporters have obtained a poster that have the vice president’s picture with the above inscription. See it bellow.. 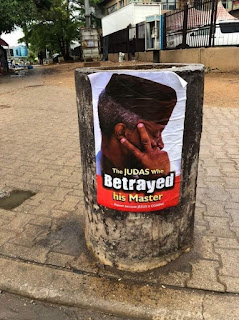