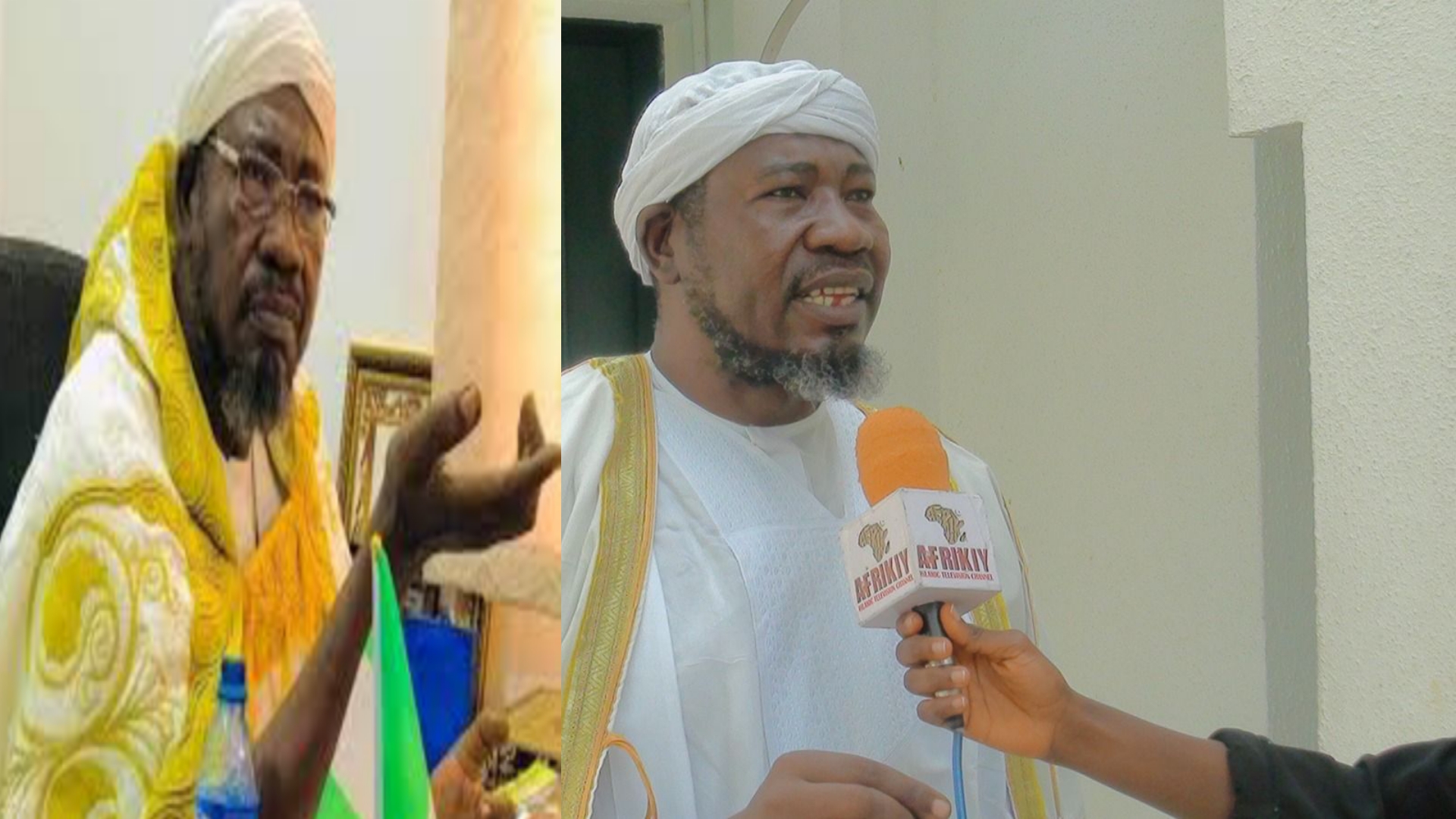 The imam of the former National Assembly Representatives neighborhood mosque, Sheikh Muhammad Nuru Khalid, said that ending his appointment by the mosque’s management committee was a necessary price he had to pay in exchange for identifying with the suffering masses and speaking the truth to power. After the Friday sermon, April 1, 2022, the imam of the Juma mosque headquarters of the National Assembly in Abuja, Sheikh Muhammad Noura Khalid, was suspended for the first time. But in a letter dated Monday, April 4, 2022, titled “Speech of Disengagement from the Services of the National Assembly Mosque,” ​​the mosque’s management committee broke with the cleric.

In the letter signed by the committee chairman, Senator Seydou Dansado, he accused the imam of not showing remorse after suspending his work. Since then, Sheikh Nora Khalid got another job in Abuja as Chief Imam. However, this issue has generated a lot of controversy and interest among many Nigerians, especially on social media. In this interview, Sheikh reveals his sanity after his dismissal. Do you think there is anything I said in a viral Friday sermon that you now regret?

Every word I said (in the sermon) is mine and I stand by her. I pray to God that he put it in my record and that you read it to me in the hereafter, because I believe that the sermon is a recompense.

I only tried to save the lives of innocent Nigerians by restoring the morale of the government. I just tried to remind them that democracy is not just about election, but more importantly about preserving life. Security is one of the duties of every sane and reasonable government.

So, what’s wrong with that sermon? I don’t see anything wrong, but if someone else sees otherwise, they can teach me.

Do you think the mosque committee was wrong to criticize abuse in the first place with some of the things you said?

i dont want to be caught in saying that the mosque management committee was wrong because there was no meeting of the committee prior to the procedure. It was a one-man business and decision.

Senator Dansado made the decision with one or two men and not a quorum for the committee. If I say they were wrong, that means I want to go back to that place.

I just want them to monitor and rate the reaction of Nigerians. Are Nigerians happy with the situation?

Through their work, especially the chairman of the committee who hails from Zamfara, they are sending false signals to the people of Zamfara that they are happy with what the bandits are doing. But you can’t say you fired me, because I said let’s have a united Nigeria free from banditry, crime, terrorism, conflict and insecurity. I ask for a safe Nigeria. Is this an abomination or a sin?

But in the letter sent by Senator Dansadao, which is now in the public domain, he accused you of persuading Nigerians not to vote in the 2023 elections, and condemning insecurity.

You have the video. Is it an invitation not to vote or to vote with a condition? Let him check his English well. The first statement I made was “Yes, we will vote but on the condition that security be provided before 2023”.

Perhaps the point the Mosque Committee was trying to make was that without a vote in 2023, the country would face a constitutional crisis that would be worse than the current insecurity, because there would be no legitimate government…

Do you think I advocate not voting? This is not my call, but you can reinterpret it the way you want. Suppose without voting in 2023 there will be chaos, but have you forgotten that a ruler in this country once said that bandits are able to lock down Nigeria, because they have the ability to do so? If this is the situation on the ground, if we don’t take action before 2023, can they not shut down Nigeria? So, we should start doing something, and that’s what I did; Telling the government that there can be no elections by 2023 if it fails to take action. I’m lucky that the message went viral and everyone heard it. So whether you like it or not, it will bring about positive change in Nigeria.

One of the things the mosque committee raised in your expulsion letter is that they think you didn’t regret having been suspended, because the suspension was supposed to help you think and double-check some of the things you said in the Friday sermon. . What exactly is between you and the mosque committee because Nigerians want to know? They describe their actions as punishment. They intended to punish me, but they rewarded me, because Nigerians now know me better than before.

I’m more popular now than ever and more people have listened to my sermon in the video. Even if they were really punishing me, I can understand that. I can’t change. I will never feel free and happy because Nigerians are dying or supporting incompetence and lack of political will to deal with bandits and crime. It’s not me who says “no” to killing that’s supposed to change, but bandits.

The government will deal with them to change. If you have the power to punish anyone, go and punish the thieves. You cannot display your strength in the mosque. I have been serving the mosque for 15 years and have criticized previous governments.

Under Jonathan’s regime, I said “no” to the killings until I asked the president to resign. It is in the records. Then, they were happy and congratulated me. Were they silent? I have no record of them writing to me at the time to condemn my actions. How much is even my expenses from the mosque? I would like them to answer whether in the past fifteen years there has been any internal or external audit of the mosque.

But Senator Dansado made it clear that there is nothing wrong with criticizing the government, but the pulpit is not the best place to do so, because the mosque is a religious place. How do you respond?

Well, I can’t understand his language, because I have a record of using the mosque’s Dansadau to preach and criticize the government and I can produce it. Dansadau did it not just once but many times. He did it against a government that I don’t want to mention, because I don’t want to be seen as preferring one over the other.

However, let me point out that there is a difference between criticizing politics and being political. We know that the campaign took place in that mosque of this administration. In the meantime, I would like to say that the mosque is an Islamic center. Islam is a holistic life that includes politics. People are being killed, our train is under attack, many hijackers and others are dying.

Now, are you trying to tell me that the mosque is not a suitable place to condemn these abominations? If people tell me that it is wrong to say that killing is bad in the mosque, what is the Islamic religion? Instead of being quiet when the people can’t protect their souls but have the privileges of the government, it is better for me to die or become unable to feed myself. I can’t stay in a place I can’t call it by its name. I have nothing to lose.

Do you feel pained that you don’t have the privileges of the government as they do, and so, you criticize the government’s efforts?

I’m always on the audience’s side because I’m one of them from whatever angle you look at me. I am a fan. My children go to public schools. I live in a local area. I sit and eat with the locals. My students are locals. I move with the fans and so I feel what they feel. I’m not in a cage somewhere, I don’t know what’s going on. As a preacher of truth, i don’t want any undue privilege from the government. I just want my rights.

But some people think you’re a bragging person who enjoys the eulogy you receive from the public and on social media.

I have been named the “Digital Imam” because of my early adoption of social media in what I do. But in this case, who went to social media first? Was it me or the committee? Why didn’t they use the mosque to inform me of my arrest? Why did they rush to the media in the first place?

Now, they don’t want me to respond via the media. Do you know who leaked the sack letter to the media? am i the one to be asked? If you are not comfortable with my big social media followers, go ahead and create your own page. I have created my social media pages and handles to spread Islamic interpretation (lectures) always. I don’t even know when I started getting followers but I realized I have a huge following as I am not biased and always try to unite Nigerians.