Skip to content
HomeBlognewsThe footwear that killed my husband-woman explained 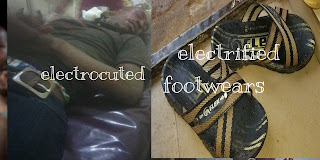 Efewu people of Benue chunk out in crowd to mourn the death of one Mr Ekele and also to find the mystery behind his death.

Ekele who came back from farm had gone to rest while the rain was dropping. He woke up after two hours to set out for some other activities just to found out by his family that his foot wears electrocuted him.

The wife and children who shouted for help when Ekele was slumping down could not understand the cause until they held him. The dying body of Ekele was shocking the wife so she left the husband and asked the children not to touch him. When other neighbours came, one Itodo Amuta tried to touch his lifeless body too and he confirmed that his body is electrified and really shocking like live wires.

To the dismay of many who understand how electricity works, the entire village does not  have power supply neither is there any forms of wire connection to the house.

An electrician who should be described as “brave man”,  wore  hand glove to see if that will insulate him from the shock. He then touched Ekele’s body and found that he was not affected by the mysterious shock.

Itodo then started taking off  cloths from the body of Ekele. To ascertain the source of the shock, each time he takes off any thing from Ekele’s body, he tries if his body was still electrified.

After taking off every thing from the lifeless body, they discovered that the source of the shock was the footwears.

As at the time of filling this report, any one that touches the foot wears gets a shock of high voltage.

The later discovery is that the shocks only occurs when they touch the left and right leg of the footwears simultaneously. Educated people are saying, “perhaps there are some kinds of Negative and positive electrons that are found in the pairs” but this assumption is yet to be proved scientifically. Others have associted the mysterious footwears to be generated from spirit world.

When our correspondent interviewed the family of the desist, they explained that Late Ekele had bought the foot wears two months ago and have used it without any problem.

“This is the footwear that killed my husband, a mystery that is new to humanity happened to us. We know that this footwear is not wrongly produced by the compnay rather, enemies of our family had gone to do some spiritual magics. We will find out who did this even as they have succeeded in killing my husband.” Mrs Anthonia, the wife of Ekele speaks in tears.