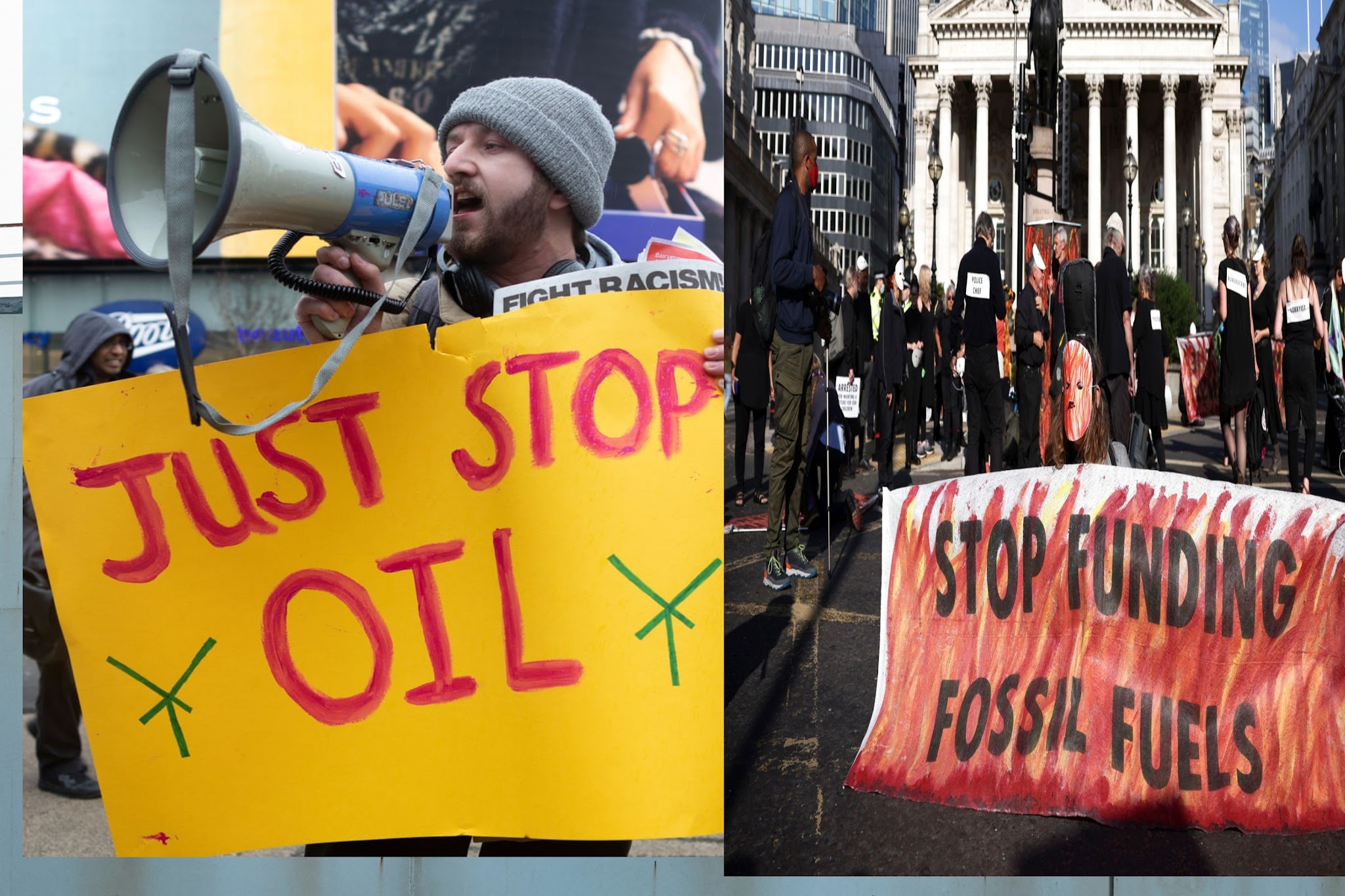 ACTIVISTS CLIMB OIL TANKERS AND STICK THEMSELVES ON ROADS AROUND LONDON, BIRMINGHAM AND SOUTHAMPTON

Early Friday, Just Stop Oil supporters began shutting down oil refineries around London, Birmingham and Southampton by climbing over tankers and sticking themselves to road surfaces.

Shortly after 4 a.m., activists closed stations in Burfleet and Grays, Essex, which they said was the largest in the country. Near Birmingham, in Tamworth, a group of more than two dozen protesters hoped to disrupt the nearby Kingsbury oil terminal. However, due to police intervention, they were only able to block the road leading to the site.

Just Stop Oil has asked the government to agree to stop all new licenses for fossil fuel projects in the UK. They have pledged to continue disrupting the UK’s oil infrastructure until the government agrees.

I don’t want to do this but our genocidal government has given me no choice. They know that oil is financing Putin’s war and driving millions of people into fuel poverty while energy companies are making billions in profits.They know that allowing more oil with gas extraction in the UK is suicidal and will accelerate global warming.

‘It means millions dying from heat stress, losing their homes or having to fight for food. This is the future of my generation, I stop when the oil stops.’

This action is part of a planned series of protests against the UK’s oil infrastructure. Extinction Rebellion, which is set to start the next wave of protests on April 9, said it supported the ‘Just Stop Oil’ campaign and mobilized its activists to join.

Just Stop Oil said its campaign signals a shift from civil disobedience to civil resistance. What this means, one supporter told The Guardian last month, ‘is it stops indicating what the government should or shouldn’t do [and instead] actively stops the government doing what it shouldn’t do.’

The blockade on Friday came in defiance of a temporary Supreme Court order preventing groups from protesting outside oil terminals. Outside Kingsbury and on the roads leading to the site, the posters read: ‘Effective by temporary injunction of the Supreme Court. It is strictly forbidden to prohibit, slow down, impede or interfere with traffic on this road as part of the protest activity of Just Stop Oil and Extinction Rebellion, Insulate Britain, and other related movements. Inability to conform to an injunction may lead to imprisonment.’

In Tamworth, activists gathered at a nearby McDonald’s before making their way to the site but were initially deterred from action by a police helicopter.

One activist said that scouts saw large numbers of policemen in unmarked cars near the site. They were afraid that if they got into the vehicles at the last stage of their intended journey, they would be stopped and arrested, but they hoped that they could find a way to pass. In the end, the group split up and most made their way to Kingsbury on foot.

Activists in Tamworth said police tried to prevent them from reaching the Kingsbury oil port but realized they had no power to obstruct or detain them. By a little 8 a.m. on Friday, several of them had managed to make their way to the site’s main entrance, where they sat down to prevent trucks from leaving or entering the site.

‘We are against the state,’ said one of the protesters. ‘And we will lose, but we have to try something.’

…we have a little favor to ask. Tens of millions have placed their trust in the Guardian’s daring journalism since we began publishing 200 years ago, turning to us in moments of crisis, uncertainty, solidarity and hope. More than 1.5 million supporters, from 180 countries, now support us financially – keeping us open to it and fiercely independent.

Unlike many others, The Guardian has neither shareholders nor a billionaire owner. Only the determination and passion to deliver high-impact global reporting, always free from commercial or political influence. Presenting such reports is vital to democracy, to justice, and to the demands of the powerful.

And we offer it all for free, for everyone to read. We do this because we believe in equality of information. More people can track the global events shaping our world, understand their impact on people and societies, and become inspired to take purposeful action. Millions can benefit from open access to good and honest news, regardless of their ability to pay for it.

If there was ever a time to join us, now is the time. Every contribution, no matter how big or small, supports our journalism and supports our future.