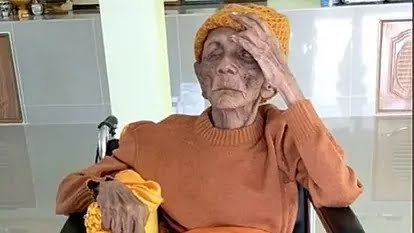 IS THE OLDEST WOMAN LIVING 399 YEARS OLD? WHERE DOES THIS RUMOR COME FROM?

Netizens have been shocked over the past few days by a rumor of a 399-year-old woman.

A number of videos and reports emerged claiming that this woman is still alive despite being nearly 400 years old, while similar posts on social media claimed that it was a 169-year-old man.

And now, a similar video has gone viral on TikTok where a very frail, emaciated and old person appears lying on a bed. Some users have started claiming that the person in the video is a woman around 399 years old.

However, these rumors have since been debunked, because the person who appears in these videos and reports is actually a completely different person.

All the speculations turned out to be a joke as the person in the video is actually the same monk who is famous for his supposed age of 163 years.

The monk who was rumored to be 163 years old is actually 109 years old.

This person is a Buddhist monk, Luang Fu Yai or Long Ta, who is 109 years old and has been living in Thailand and has been globally proclaimed since January.

This happened because his granddaughter shared videos of him on TikTok under the title @auyary13, which have amassed millions of views so far.

For example, in one of these videos, Luang Pho Yai is seen praying for a little girl from his hospital bed, this video has already garnered more than 88 million views, with the caption reading as follows.

The caption read, “When the little grandson came to call Luang Ta, he could feel the love and care, and called to knock the grandson’s head, amen.”

Who is the oldest man on earth?

According to CNN, the world’s oldest surviving man is 119-year-old Ken Tananka, as her great-granddaughter reported on Twitter on January 1 to celebrate her birthday, and the comment was as follows.

“Great achievement. [Ken Tanaka] is 119 years old, I hope you continue to live life cheerfully and to the fullest,” the caption read.

Ken Tananka has experienced a number of historical events, such as World War I, World War II and the Spanish Flu of 1918.

In 2019, the Guinness Book of Records recognized the 119-year-old man as the world’s oldest living person.