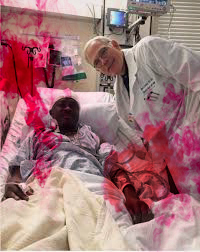 It Has Been Reported That Famous Comedian Julius Agwu’s Marriage To Ibiere Maclayton Of Nearly 14 Years Has Broken Down. Kimi Fellaini recalls that the couple had a difficult time when Agwu fell ill in 2015. The legendary comedian, who made a difference on his show, Crack Ya Ribs, had successful brain surgery in 2015, recovered but then suffered a relapse in 2016 when he went to London for his show.

Although he hasn’t appeared since then, he tried to revive his career by bringing back ‘Crack Ya Ribs,’ and announcing his plans to celebrate 25 years in comics, Agwu couldn’t get it done. Although he didn’t look as lively and heartfelt as he had before the illness, Julius Agwu is said to be recovering and everyone believes his wife was taking care of him. ‘She was taking care of him sometimes but there were cracks in the union. Maybe she got tired of the current situation – the cash flow wasn’t what it was when Agwu was so rich and healthy. Sources close to the couple told reporters: ‘She must have been sick of the situation and left Agwu who isn’t as fit as before.’

Abonnema-born Ibiere has traveled abroad with her children and has only shared pictures of them on Instagram. Ibiere went back to her maiden name. Ibiere has been one of the pillars of support for her husband during his health challenge and shared in an interview years ago that his medical condition had worsened to the point that he stopped breathing and was nearly taken to the morgue. According to Ibiere, she remembered, ‘Then now I’m going to be a widow, how do I deal with these kids? Then, they became my thoughts at all time.’ It wasn’t until after a trip to an American hospital that Julius discovered he had three tumors in his brain and one of them was the size of a golf ball.

In an interview with him, Agwu  recalls, ‘I started looking for my property documents to give to my wife. There was a day when they weren’t at home, I almost committed suicide.’ After his successful surgery at Park Plaza Hospital in Houston, America in 2015, the comedian decided to drop a thank-you song called ‘Second Chance’ with a pledge glorifying God on all his platforms. They married on May 31, 2008 and have two children, Zahra and Zadok. They had both celebrated their 12th wedding anniversary in 2020.