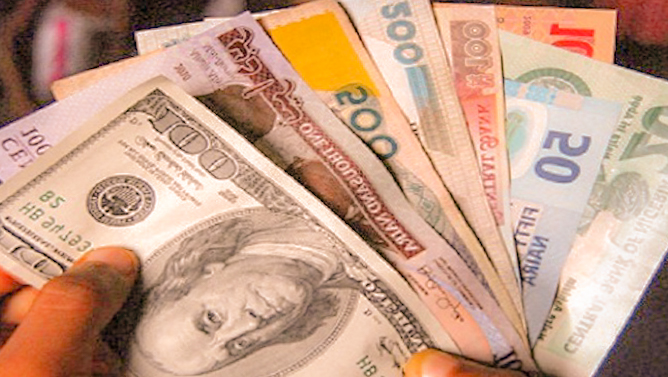 Correspondents reported that the ongoing scarcity of foreign exchange rates against the naira in the country continued to deteriorate even though the parallel market exchange rate was slowly moving towards N590/1. This development, Newsonline Nigeria realizes, could lead to massive job losses in the manufacturing industry, among other sectors, according to the Manufacturers Association of Nigeria. Newsmen reports that this development comes eight months after the Central Bank of Nigeria stopped selling forex to Bureau de Change operators and promised to increase liquidity in commercial banks. Checks made by repoters  on Tuesday showed the exchange rate settled at N585/$1 and N785/£1 on the black market against N582/1 last Friday. Just as banks have also limited customers’ access to forex, setting a cap of $20 per month for online transactions. Insiders told reporters that things could get worse as the election campaign intensifies, adding that politicians have started collecting dollars, which has fueled demand.

‘The naira will continue to fall because those who need dollars cannot get it and will patronize the parallel market, which leads to increased demand. It is also one of the repercussions of an election year. We are not earning much foreign exchange and we will spend more funding on gasoline subsidies. Ultimately, there will be a wider gap between the import-export window and the parallel market,’ said a government official who requested anonymity.

The derivatives firm’s CEO, Bismarck Rewan, predicted in January that Nigeria’s central bank would devalue the naira by the end of 2022, adding that spending on political campaigns ahead of the 2023 general election would put further pressure on foreign currencies. Supply in the Nigerian economy. Discouraged manufacturers and travelers have already been forced to buy from BDC operators more than before.

It was said that in some cases, banks were only able to meet about 30 per cent of customer orders. ‘I applied for a business travel allowance of $5,000 through the CBN portal. But a businessman who wished to remain anonymous said, “But my bank said he could only give me $2,000.’

However, he learned that the manufacturers’ experiences were much worse. ‘I never would have imagined in a million years that Nigeria would reach this point. How do you explain that the manufacturer has a bill of $425,000 for importing materials and all the CBN allotted to him is $210?’ said Paula Advila, Chief Operating Officer, Banrut Rolls Nig Ltd.  He learned that MAN had begun reaching out to the federal government for urgent intervention even as the cost of diesel increased, exacerbating the ease of doing business. MAN General Manager Segun Ajayi-Kadir said in a conversation with The PUNCH that manufacturers are now dependent on the parallel market for foreign exchange.

The scarcity of foreign exchange and the high cost of diesel has led to a significant increase in the cost of production, Ajayi Kader said, adding that employers may have to lay off some workers in order to adapt to the new reality.

He also recommended reopening the northern land borders to allow fuel marketers to bring in diesel from neighboring countries such as Niger and Chad, which both have operating refineries. On the job loss, he said: ‘Yes for sure. It is very difficult especially for small industries because if you are not producing, how are you going to pay salaries? Therefore, industries may have to be ‘the right size.’ That is why we are having all these consultations so that we can get the attention of the government. The scarcity of foreign exchange is also unfortunate because it affects the manufacturing sector the most. The manufacturing sector has a multiplier effect on the economy and this sector should be given priority. Our members get ridiculously low amounts in the face of huge demands.

‘We need forex for materials and spare parts that are not available locally. We were encouraged when CBN said it had stopped allocating forex to BDC in order to put more money in banks but in the future, this has not happened. We have access to BDCs for more than 90 per cent of our needs. When you ask for $400,000, you get $2,000. When you ask for $1 million, you get $50,000. That’s ridiculous. Economists have also warned that the rising cost of production due to the lack of foreign exchange will lead to inflation as companies will be forced to raise the cost of goods. Economist and senior lecturer in economics at Pan Atlantic University, Dr. Olalikan Orend, said manufacturers will be largely affected by the issue of scarcity of dollars.

He said that this crisis will exacerbate inflation and negatively affect the gross domestic product.

The Economist and CEO of the Center for the Promotion of Private Enterprise, Dr. Moda Yusuf, lamented that the country has been suffering from this problem for some time, with many manufacturers sponsoring the parallel market at exorbitant prices.

He added that this would increase the inflation rate in the country.

The effect of this, first, is that many manufacturers have been forced to take care of the parallel market and they are getting forex at exorbitant rates. Therefore, their production costs have been increasing. The prices of the products are increasing.

He said, ‘For some products, the quality of the product has been going down and the quantity has been decreasing so that they can maintain the price and not inflate it too much. It puts a lot of pressure on the manufacturing sector and affects its ability to create jobs.’

He said, ‘It is a danger to our local companies as they are not able to produce at the optimum level. Some people may end up being fired, which could lead to increased unemployment. Eventually, the country will fall back into recession.Central Bank of Nigeria needs to intervene.’

In response to the allegations, CBN, through its spokesperson, Osita Nwasinobi, advised these manufacturers to write formally to the main bank about their complaints.