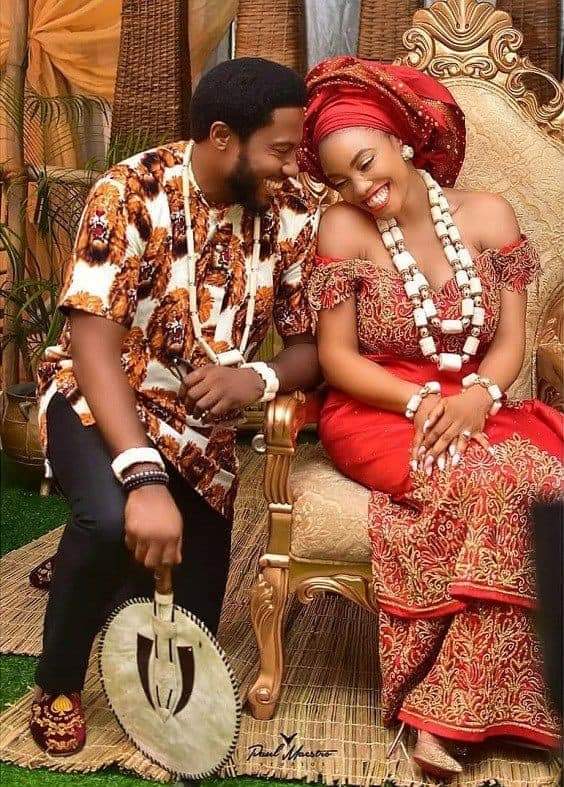 The first phase is the checking of the items on the list,collection of the list is a pre-tradional marriage rite.The parents or relations of the groom usually collect the list from the secretary of the bride’s town union. A certain amount that does not exceed a thousand naira is paid for the collection of the list.some of the items in the men’s list includes; eight jars/kegs of palmwine(nkwelu),eight jars of palmwine(ngwo),eight cartons of small stout,eight bottles of seaman’s Aromatic schnapps, eight heads of snuff,eight packets of cigarettes(Benson&hedges). The number eight is significant to my people because it denotes the Igbo’s four market days and their blessings doubled to my people. This accounts for why their items are either “eight” or “fours”.some of the items in the women’s

There is another list called the mother’s list,its fulfillment is the concern of the groom and the bride’s family. Some affluent bride’s families do not really bother about the mother’s list.Their major concern is the presentation of the items  that belongs to the kindred members.Some men instead of a leg of a goat presents a whole goat to show their degree of affection for their wives.

The second phase is usually an evening affair. This is to ensure that guests from far and near attend the occasion. While the master of ceremony invites some dignitaries to the high table,the women from the groom’s place who had completed the presentation of the item on the list stand at the entrance of the bride’s compound singing.The women in the bride’s community will all go out en-mass and welcome their visitors who have come to marry their daughter. They will present traditional dishes like ugba with stock fish,local beans(Akidi),A tray of garden eggs,and two crates of soft drinks. They will then dance to their seats.

When everybody is seated properly, the opening prayer is said followed by the presentation of kola nuts.While the guests eats the kola,the oldest in the bride’s kindred demands for traditional wedding cup made out of the gourd.He demands for the special palm wine”Nkwuelu”,The cup is filled and handed over to the bride accompanied by her Ashebi friends to show all and sundry her husband.

Moreover,in presenting the items,four men and women from both sides should go for the presentation as well as the acceptance of the items.To save time the men stay at a different place while the women at another place.When this is over,the men will then handle the negotiations for the bride price.No woman is invited but women can watch from a safe distance. This is the most exciting aspect of the first phase.The bridegroom is asked to pay the money to the father-in-law.The first phase is over when the bride’s father comes out and announces that his son-in-law has paid the bride price.The negotiations is characterized by dialogue and disagreement until the bride’s people finally reach a concrete agreement.

Conclusively,when everybody is seated properly, the opening prayer is said followed by the presentation of kola nuts,While the guests eats the kola,the oldest man in the Bride’s kindred demands for the special traditional wedding cup made out of gourd.He also demanded for the special palm wine”nkwuelu”.The cup is filled and handed over to the bride accompanied by her ashebi friends to show all and sundry her husband. She goes off in search of her husband who hides somewhere. Other young men would be offering her money and begging her to give them the drink instead but she would ignore them and search on.When she finally finds her husband, she kneels down ,takes a sip of the palmwine and gives to her husband who also drinks and gives to his father who sips and returns to the son to finish the dreg accompanied with a lot of ovation.The bridegroom at this point returns the cup to the oldest man with some money.The groom’s father adds more money. The money that accompanies the wine cup belongs to the oldest man in the kindred.At this juncture,the bride’s father is invited to bless his daughter and the husband. A round of applause heralds this,after this,the couple is directed to the dance area where friends and well wishers express their feelings by splashing money on them.While they dance , the guests are entertained with food and drinks. The ceremony usually ends with a vote of thanks presented by the groom,after which there is a closing prayer and all the invited guests, important dignitaries,friends and well wishers all retire to their various destinations.