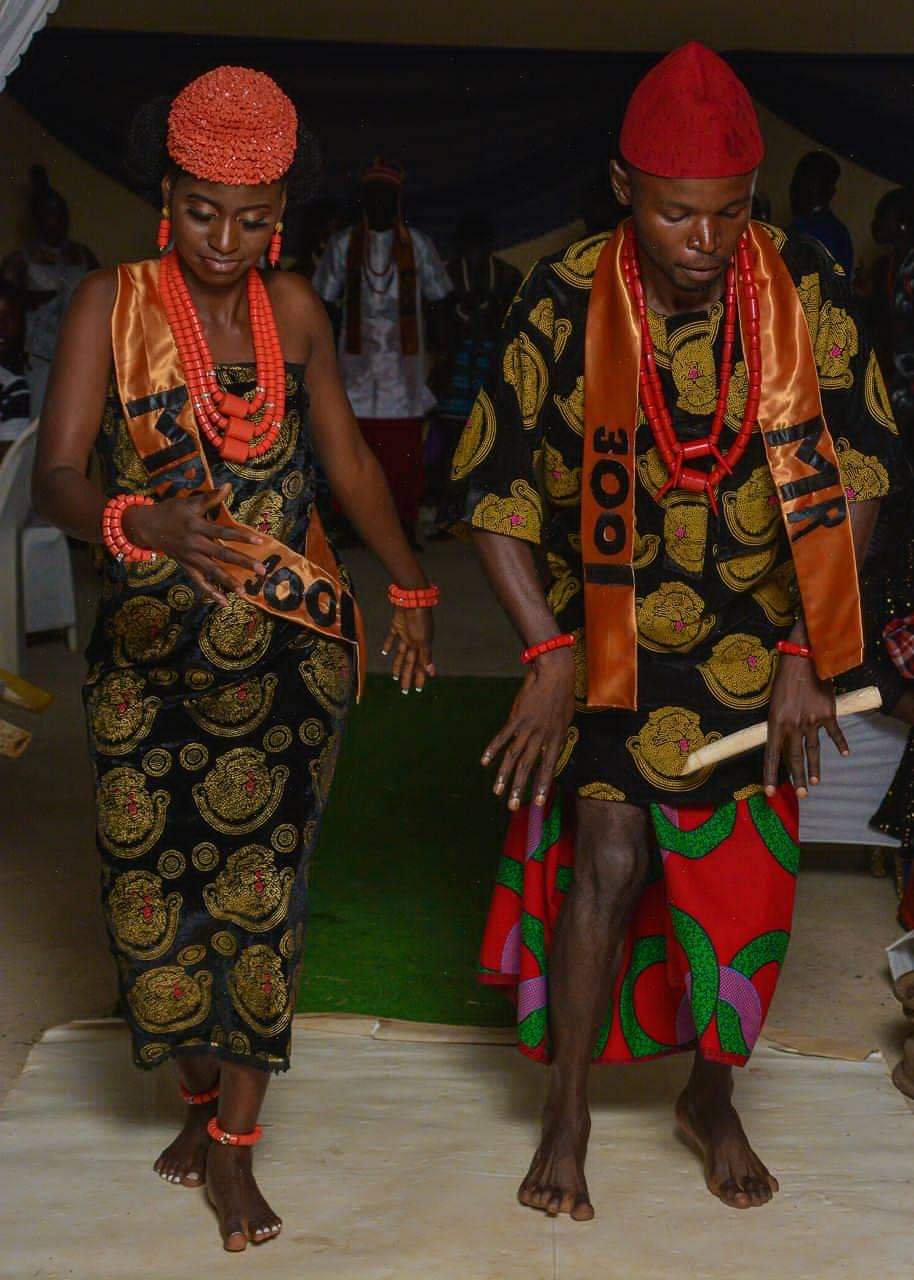 The groom having fulfilled all the preambles in the marriage
including iku aka na uzo (knocking on the door) ibu zu mmanya (completion of wine
carrying), is given a traditional marriage list which contains all the item
required by the bride’s family and kindred for the marriage. A date is fixed
for the Ihe Nrisa when he will come with his immediate and extended family,
kindred and village people, friends, relatives and well-wishers to meet his
bride’s family and relatives too.

The marriage list is divided into 3 parts. The first part is
called Ibu Efere, which contains a list of things the groom will buy for his bride.
These are her first clothes after marriage.

The second part is a list of things the groom will buy for
the bride’s parents.

The third part include a list of drinks and food items for
the family and kindred.

After the presentation, counting, haggling and negotiations
that follow where the things in the list is not complete, the groom and his parents
are excused to go discuss and settle the bride price privately.

After this, the ceremony continues and at the end of the
day, the family of the groom takes their new wife home escorted  by a few maidens.

Having taken his new wife home, the groom now books an
appointment with his inlaws on when they will come to know his home too.  The inlaws will, on this day settle their
daughter finally with whatever property and gifts they have for her. This marks
the completion of the marriage ceremony in Mbano.

The birth of a child is an event that is always celebrated
across the Igbo land and it is in three phases.

First, when a child is born, the father sends words to his
family (after naming the child at first sight), who in turn formally announces
the birth of the child round the compound. The special announcement is called
“Iha Oro”.  They will recant a special new
baby’s chant and songs and make special noises such that anybody who hears them
would rush to where the noise emanated, being the ancestral home of the new
baby or his or her father’s home. The visitors and well-wishers would be
entertained with whatever food and drinks available and given white baby powder
to rub on their neck.

The next stage is that the father of the new baby would
inform his inlaws of the delivery of a new baby by their daughter, which also serves
as an invitation for the Mother of the bride (new mother) to come to take care
of her daughter and the new baby, an activity we call “Omugwo”. The inlaws as
well repeats the Iha Oro in their own family and the grandmother of the new
baby then prepares to come on Omugwo for a period of three months
traditionally.  However, these days due
to economic hardship and trends in the society, many people reduce it to the
period of  two weeks to two months. The
grandmother is expected to buy special food items including traditional leaves
and herbs that are usually administered on newly delivered women. When these
items are ready, off the woman goes to her inlaws house to take care of her
daughter who is expected to be on Omugwo for the period of her stay, meaning
she will be resting and eating without doing any serious or hard job.

After the Omugwo, the grand-mother of the new baby is set to
return to her own home.  Her daughter and
son inlaw would prepare for her home coming.  They will not forget to send a bottle of hot
drink for the father inlaw. When the woman gets back home, she initiates
another round of Iha Oro to announce her return and shares part of the food
items she came back with to the women who came around to welcome her.  This marks the end of child birth and naming
ceremony in Ehime and Mbano generally.

Burial is always long, tedious and money guzzling in Ehime.
When anyone is lost  in Ehime, elders in
the family meets with the immediate family of the deceased to discuss the
burial programme.  A date will be agreed
and children of the deceased will meet elders of the kindred and village to
communicate the date to them.  The
Financial Secretary of the kindred, village or community will go through their
records to ascertain if the deceased has an outstanding levy or any other
commitment.  The bereaved family will settle
the deceased’ indebtedness before going forward with the burial arrangements.

Indebtedness settled, the elders and leaders of the village
would go through their diaries to see if the date is clashing with any other burial
in the village or any another important programme in the village or
community.  There are days when burial is
forbidden in different villages (some villages do not conduct burial on their market
day, etc).  Their approval will be given
if the date is not clashing with any programme, and if it is, a new date will
be taken.  Where the deceased is a church-goer,
the priest is approacheda and the Chrcu will check the scribes for approval to
vbs granted.

The family is expected to pay all the outstanding medical
and mortuary bills, buy the coffin/casket, engage entertainers, invite the
deceased maternal people (for a man), the relatives, inlaws far and wide, friends,
Umu Nna (kinsmen), Umu Ada (women from the village who are married outside the
village), and well-wishers.  On the eve
of the burial, after the wake-keep, (Christian or traditional), Umu Ada will
come and query the children of the deceased on how well they took care of their
late father or mother and where they are not satisfied, fines are imposed on
and paid by the children of the deceased. After this, Umu Ada will settle also
for merriment.

Other activities on the eve of the burial ceremony include
the reception of the maternal people of a deceased man.

Early in the morning of the burial day, the villagers will
gather for the digging of the grave and the family of the deceased will present
them wine and food for the job.  Visitors
to the site and people coming around are expected to drop money into a plate
for the grave diggers but this is not compulsory, just obligatory.

After the burial talk, the priest or elders will lead a
procession to the grave site, conduct the dust to dust and the body is lowered
and covered.  After the interment, the merriment
follows.

After the normal burial ceremony comes the kindred
burial.  The children of the deceased are
expected to present a goat or cow to their late parent(s).

For deceased titled men and women, they have special burial programmes,
conducted and witnessed by only members of their group and including the 8 market
days ceremony for Ndi Nze na Ozo (traditional title holders).  For traditional healers and herbalists, they
have their own special burial programmes and only their members partake in the
ceremony.

Throughout these ceremonies the spouse(s) of the deceased is
not expected to engage in any work or outdoor trips.

After the burial of a
church-goers, the deceased family hosts thanksgiving to mark the end of the
burial ceremony and the family members return to their respective bases.  The same thing applies to traditionalists who
host a ceremony (Igbasa Ulo Akwa meaning Ending the Cries), the heads of the
spouse and children of the deceased will be shaved by the kinsmen as a sign
that they lost a spouse, father or mother after which crying seizes and mourning
period starts and the family of the deceased would return to their jobs and bases
respectively.

After Igbasa Ulo Akwa comes the official mourning period,
which traditionally observed for one year but some people now observe it for 6
or 3 months.  Within this period, the
spouse and children of the deceased are expected to wear sack cloth
(traditionally dark clothes only but some people these days adopt white
clothes) leave their hairs and beards unkempt throughout the mourning
period.  At the end of this period, a
ceremony to remove the sack cloth will be hosted by the deceased’s family and
all their sack clothes will be burnt.
This marks the end of the burial ceremony in Ehime and Mbano generally.