Skip to content
HomeBlognewsCULTURES AND TRADITIONS OF MARRIAGE RITES OF THE PEOPLE OF AMUDO COMMUNITY IN AWKA SOUTH OF ANAMBRA STATE, NIGERIA. 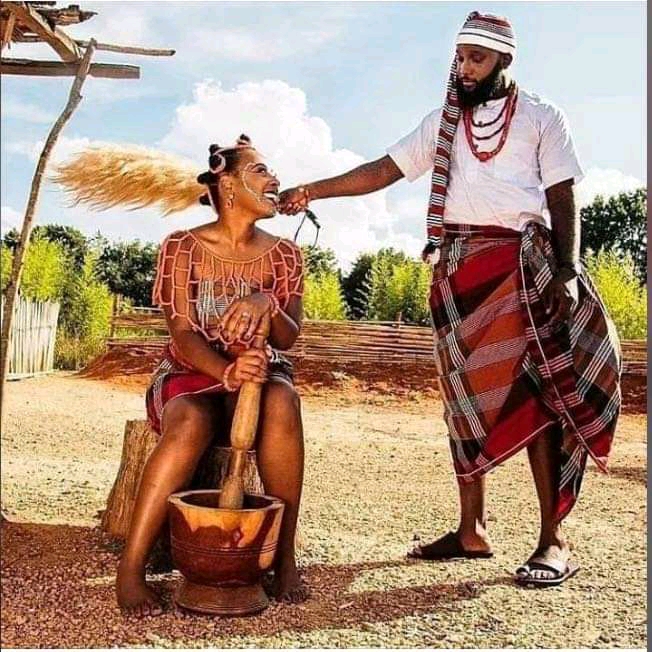 CULTURES AND TRADITIONS OF MARRIAGE RITES OF THE PEOPLE OF AMUDO COMMUNITY IN AWKA SOUTH OF ANAMBRA STATE, NIGERIA.

Culture is the way of life of a certain group of people living in a geographical entity.

This work centres on the cultures and traditions of the marriage rites of the Amudo people. The Amudo people have  different stages on marriage rites or what is popularly known as payment of dowry. The ceremony of the payment of dowry was originally inexpensive but as time went by, people in their quest to show how affluent they are, have made the process rigorous, time consuming and expensive.

The marriage ceremonies include the following:

1. MPAMMIA NWANYA: This is the first stage of the marriage rites, the family of the groom is expected to present six gallons ( Five litres each) of palm wine ( Nkwu enu) to the family of the bride on three occasions. This represents ‘MMIA AJUJU’ ( A  drink to ask for the girl’s hand In marriage).’ MMAI NRU ONU NWANYA’ ( A drink presentation to the bride to be to find out if she has any interest in the groom). ‘ MMIA NPAZU’ ( this is to seal up the marriage agreement).

2. MMIA NNE: Two gallons of (NGWO) a certain type of traditional drink or two crates of twenty four (24) bottles of soft drinks will be presented to the bride’s mother by the bridegroom.

i. The bride price is not fixed, it greatly depends on individuals and their perception about marriage. In many situations, both parties agree on a certain sum, by practice, one can never finish paying for the worth of the bride.

ii. NSENETE IFE MMIA: This is the first visit of the bride to the bride’s groom home, at this point , she will be introduced to the groom’s family and community and this visit lasts for seven (7) days.

iii. MMEDO IFE: The bridegroom’s family will present two (2) gallons of palm wine ( Nkwu) it would be presented to the bride’s family. On this visit, the date for OKUKU ONYE UWA and EGHU NNA will be fixed.

(a) OKUKU ONYE UWA:This is the visit of the bride groom and his family to the bride’s home for traditional wedding ceremony.

(b) EGHU NNA: This ceremony is performed under certain circumstances and therefore not mandatory.

c. One bottle of vodka

e. One carton of beer

Eight person of both sexes from the bridegroom’s family will proceed to the bride’s family for the ceremony. They will also present the following items;

a. One he-goat or five hundred naira.

e. One bottle of vodka.

As The ceremony proceeds, the bride’s family will present to the groom’s family the following items;

e. One crate of soft drinks.

f. One carton of beer.

In both cases, (OKUKU IBE NNE/ OKUKU ONYE UWA alone or OKUKU IBE NNE/ OKUKU ONYE UWA AND EGHU NNA), food entertainment will be limited to the bride’s groom party of six of eight and the inner family of the bride. In this case, the first born girls from the bride’s family shall attend the ceremony. They will not be given food but will be given the sum on one hundred naira ( 100 naira) for ‘ MGBU IKPELE’  and another one hundred naira( 100 naira) for ‘NDURUGE’ both by the bride’s groom. They will be presented with two crates of soft drinks.

Women who did the days cooking from the bride’s family will be presented with two hundred naira(#200) plus two crates of soft drinks by the bride’s groom.

In conclusion, it is however important to note that these rites changes with time.