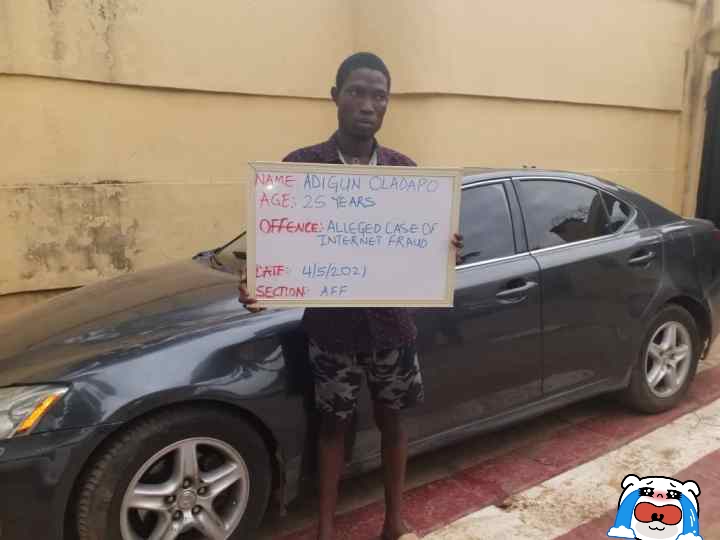 has bagged a one-year jail term for engaging in cybercrime.

The Judge in Kwara State High Court sitting in Ilorin, Justice Sikiru Oyinloye who gave the judgement on Friday ruled that his Lexus car: lS250 with registration number, Lagos KJA 141 GU, be relinquished to the Nigeria government.

Also in the court ruling, the total of N158,000 discovered in Adigun’s GTB account established to proceed of illegal deals be relinquished to the Federal government.

Also, the two laptops Apple Watch, iPhone 7 and iPhone 12 redeemed from him at the instance of arrest were ceased.

Adigun,  male; of 25-year-old, was arraigned on a two-count charge by the Ilorin Zonal Command of the Economic and Financial Crimes Commission.

The convict conned his victim through impersonation via Ohio Pandemic Unemployment Assistance Portal in the USA to receive a total of $ 6,328 around December 2020 and June 2021 respectively.

Upon the defendant pleading guilty to the charges, Andrew Akoja, the prosecutor to the anti-graft agent, persuaded the court to adjudge the defendant on his plea bargain pact dated August 4, 2021.

Mr T.A. Hammer, the defence counsel to Adigun did not challenge the submission of the EFCC prosecutor.

The court confirmed Adigun guilty and adjudge him to one year in prison with an option of an N250,000 fine.