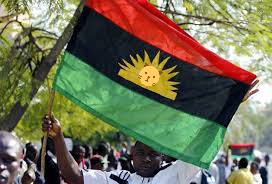 Report reaching us that the Nigeria Police, Imo State Command has killed a leader of the Indigenous People Of Biafra, IPOB in Imo state.

In a news briefing on Sunday, the police said it killed the IPOB and ESN commander after it gathered intelligence that the group are hidden in an unfinished building located in a gully in Amaifeke, Orlu LGA, Imo state.

Correspondents gathered that the agitators were planning to resume an alleged terror attack on police and the government.

It was disclosed that 2 other people lost their lives together with the IPOB and ESN leader in a gun duel in Orlu LGA Imo state.

Confirming the incident, CSP Michael Abattam, the PPRO of the state police command, said on 11 September 2021, the command’s tactical squads rounded up and stormed the camp out of the agitators found in an unfinished building in a gully at Essential Home commonly identified as NGBUKA in the Amaifeke, Orlu LGA, Imo State.