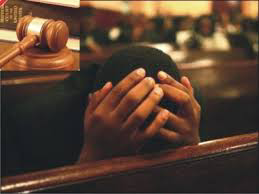 A Magistrates court sitting in Ado Ekiti, Ekiti State capital has charged Emmanuel Bejide, a 40-year-old, to be remanded in prison, for supposedly defiling his daughter.

Mojisola Salau, the magistrate,  issued a remand injunction as solicited by Sodiq Adeniyi, the Police prosecutor,  to enable him to send the copy case file to the department of the Director of Public Prosecutions, DPP for legal recommendation.

The accused was reasonably presumed to have severally assaulted his 17-year-old biological daughter, an SSS3 student, at Ikere Ekiti within September 2020 and July 2021.

Narrating her ordeal to the Police, the victim said her Dad cajoled her to a hotel in Akure in Ondo State sometime in September 2020, and had sexual affair with her, with a pledge to sponsor her to Malaysia.

Contained in the charge, the crime violated the Child Right Laws, sec. 31 of Ekiti State.

The investigating Police Officer in charge of the matter said the accused was apprehended on August, 21st  2021 when the case was brought before the Police authority in the state.

However, the trial has been adjourned to 16, September for mention.