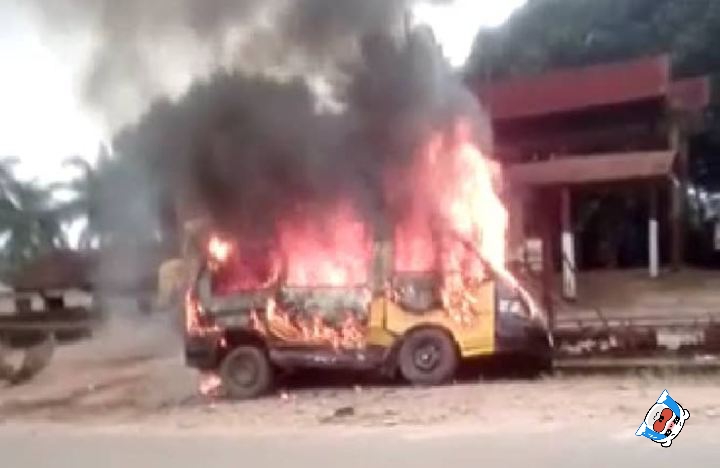 A Group of people presumed to be part of the Indigenous People of Biafra, IPOB, has this morning set a bus on fire while implementing the sit-at-home order of the unlawful group.

The group had issued a sit at home directive in memorial of the 4th anniversary of the supposed military attack on Nnamdi Kanu’s residence in Afaraukwu, Abia State.

At about 9.30 am on Tuesday 14 September 2021, members of the group assaulted innocent citizens along Nanka-Oko road in Anambra.

The rascals reportedly set a vehicle on fire, but its driver was fortunate to escape the onslaught.

DSP Ikenga Tochukwu, the Police PRO confirmed that the command responded to a distress call on Tuesday around 9:30 am on an Arson matter and brutal destruction around Nanka– Oko road.

DSP Ikenga explained that upon the receipt of the call, police operatives on ground instantly mobilized to the place and calmed the situation.

Normalcy has returned in the area and citizens are going about their legitimate businesses.

He also stressed that the command and other security operatives in the state have since heightened guards and surveillance to prevent further occurrence.

An initial finding shows that the assailants stopped a tricycle and a commercial vehicle, pursued the occupants and set their vehicle ablaze. However, he said no life was lost.