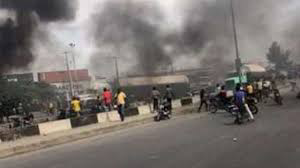 A police officer has been announced dead and many others wounded in the clash.

Below are photos from the scene: