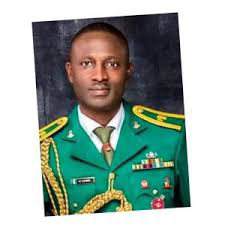 Kidnapped Major Datong, who was kidnaped in August from the Nigeria Defence Academy in Kaduna State has been freed.

Major Datong was kidnapped during marauders ambushed on the Academy last month, leaving two soldiers dead in the process.

The NDA officer was, however, regains freedom on Friday after an operation by the combined team of security officers.

According to Col. Ezindu Idimah, the Deputy Public Relations Officer, Division 1 of the Nigerian Army, the operation was successful, after the demolition of several camps owned y the bandits in Afaka-Birnin Gwari axis of Kaduna state, with the joint efforts of the Air Task Force, Department of State Security and other security agents.

Idimah said that the troops got to the amp believed to be the area where the officer was in hostage and confront the bandits in a fierce gun duel before they succeeded in rescuing the officer.

‘Major Datong was rescued upon the order of the Chief of Defence Staff and Service Chiefs, in synergy with the Nigerian Air Force and other security operatives who carried out a absolute operations to rescue Major Datong.

‘Since the abduction of the officer, the operations have been sustained and have proved quite successful. The operation also brought about the demolition of various identified bandits’ camps in the Afaka, Birnin Gwari general area and neutralisation of scores of raiders especially, in the whining hours of Friday, September 17, 2021,’ the briefing states in part.

He also noted that the officer incurred a minor injury and has been taken care of in a medical facility and have long been handed over to NDA.

‘From Division 1, the authorities wish to applaud the actions of the Nigerian Air Force, Department of State Security Service, Nigerian Police, and patriotic Nigerians for their priceless support which led to the success of the operation.

‘The operations are continuous until we apprehend or neutralise the attackers that killed two of our officers in the NDA on 24 August 2021.’