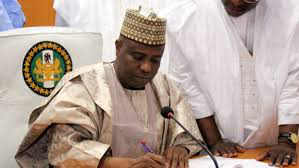 Aminu Tambuwal, the Sokoto State Governor, has declared the shutting down of all telecommunication network services in the state as one of measures in combating insecurity in the state.

The drastic measure is believed to have affected 14 out of the 23 LGAs in the state which are the most vulnerable to the attacks by bandits.

With this development, Sokoto state has become the 3rd state in Nigeria to take such decisive action after Zamfara and Katsina in the bid to hinder the operations of bandits, kidnappers, terrorists, and other criminal activities in the region.

Sokoto’s network shutdown  was verified on Monday by the state Governor, Aminu Tambuwal.

The Governor announced that permission for the action was secured from the federal government via Isa Pantami, the Minister of Communication and Digital Economy.