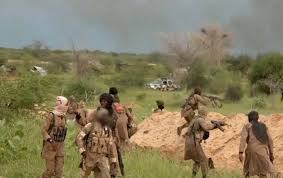 No fewer than 20 Nigerian soldiers have been reportedly killed and many others missing after a snare by militants from the Islamic State-backed sect of Boko Haram, the Islamic State West Africa Province (ISWAP), previously identified as Jamā’at Ahl as-Sunnah lid-Da’wah wa’l-Jihād in the Marte axis of Borno State.

correspondents gathered from a reliable military source that the invasion happened in Marte town on Friday.

The source said, the soldiers were headed for Maiduguri, the state capital when the terrorists stormed.

According to him, ‘It was yet another attack on Friday. An ambush is the most tough battle. Unfortunately, we lost twenty brave soldiers. It took place at Marte.’

He noted that 2 gun vehicles were set on fire and 2 others were carted away  by the militants in the course of the attack.

The militant Boko Haram and its organ, ISWA Province, have slain thousands and displaced millions in the northeastern region of the country.

Repeatedly, the Nigerian military has  alleged that the insurgency has been greatly won and often underplays any casualties.

Since January 2021, Hundreds of soldiers and officers have been reportedly killed.

Several soldiers were murdered in the year when 2 explosive-loaded trucks bumped into a military convoy in Wulgo.

Abu Bakr al-Siddiq and Bana Jundullah were identified as the suicide bombers responsible for the act. They also alleged that 4 military vehicles were destroyed.

Also in February, roughly twenty soldiers were also murdered in Malari, Borno State by the militants.

Newsmen gathered that the troops were on patrol to vacate some Boko Haram elements in the area upon a reliable intelligence when they were attacked by the insurgents.