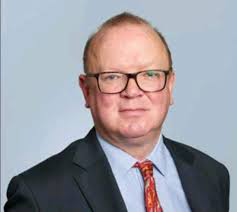 Correspondents gathered that Cooper, who was cherished by supporters of the proscribed Indigenous People of Biafra, IPOB and some other Biafra agitators passed away on suddenly on Saturday in Scotland while in company of his husband, Kevin.

Mr Cooper was universal in his impactful battle for Lesbian, Gay, Bisexual, and Transgender [LGBT] rights; teaching across the glove on human rights; battling for the Human Rights Act; advocating the European Convention on Human Rights; reviewing the European Human Rights Law Review and helping to upholdt the Rule of Law and the freedom of judges and counsels in places as complex as Turkey, Belarus, Albania, Africa and across the Caribbean.

Cooper’s struggle in protesting bias against same sex couples was great. In partnership with Tim Otty QC, He was the driving force behind the Human Dignity Trust which effortlessly disputed laws criminalising gay sex across the Commonwealth.

The biafra separatist, largely IPOB members, are immensed in grief and convey their condolences to his family and Kevin. After the deceased activist gave his voice in favour of the Biafra strugle earlier this, September, several Biafra agitators instantly loved him.

A member if the Ipob, Kanunta Kanu posted on his social media accounts on Monday; ‘Beloved Jonathan Cooper OBE,  you are no more today, your death surprised many of us and Biafrans that has closely worked with you since 2017 till your last day on this earth.

‘The best in others is what you look out for and the best of what you had is what you gave.’ You will always be remembered by Biafrans.’

Another member, Ilechukwu wrote on Facebook on Monday; ‘BAD NEWS.

The present age of BIAFRANS will never overlook your nice work for us.’

One Solomon Egbo, another Biafran faithful on Monday, posted on his Facebook page with sobbing emojis: ‘Stunned, heartbroken, broken and totally devastated is my state if mind now for the unexpected death of my brother, good friend and mentor, Jonathan Cooper OBE Esq. Cooper is an extremely good man, I am trying to avoid the use of was because I still won’t believe Jonathan is no more, gone from us for eternity. My dear Jonathan, mentor and good friend, rest In Power.  Find rest where you are now I pray. Now and always, I’ll miss you, Jonnie…’