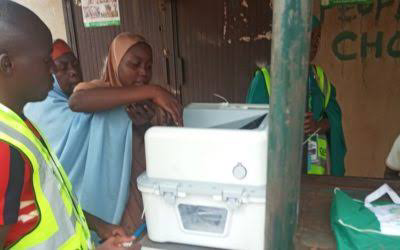 This was unveiled to the public for the ongoing chairman and councelorship election in the state.

The voting process started  with accreditation as usual, followed by voting, using the electronic machine.

Our correspondent who covered chikun local government during the election process, reports that there was calm in all the polling units except that some unit’s machines were not properly functioning. According to the reports, most were rectified as a result of  swift response of the ICT unit of the Kaduna State electoral commission.

The unit whose machine were earlier malfunctioning is Karuga, in chikun local government area of Kaduna state. Calls  placed across  to some officials in Kamazou and other units which led to the rectification.

Tell us how you feel about electronics voting on the comment section please.