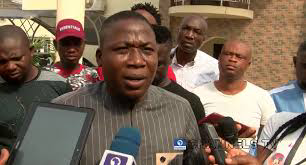 Following the ruling of #20bn damages against the Department of State Services on Friday, the service has said it is yet to be notified of the court ruling, ordering the service to pay the sum of N20bn to the self-proclaimed Yoruba Nation activist, Sunday Adeyemo, popularly known as Sunday Igboho.

Correspondents report that the Judge, Justice Ladiran Akintola of Oyo State High Court issued the order in a suit brought before it by Igboho, via his legal representative, Yomi Aliu, SAN.

Igboho’s counsel had gone to the court to dispute the DSS raid on his home situated at the Soka area in Ibadan, the Oyo State capital, around 1:30 am on 1 July 2021.

The Yoruba Nation activist had prayed the court to urge the respondents to collectively pay him the total of ₦500m as special damages for the harm done to his house and his car and another ₦500 billion as illustrative and aggravated damages for violating his fundamental rights with the malicious incursion.

The lawyer also prayed the court to  order the Federal Government and the second respondents to tender a public apology in two national dailies and reinstate all the items confiscated from the house which include: ‘#2m cash, one thousand Euros, travel papers and others.’

Reacting to the development, Peter Afunanya, the DSS spokesperson confirmed to our reporters that the court probably has not placed the secret police on notice.

Afunanya said, ‘It’s possibly the court has not notified us. Therefore, my official reaction is that I have no comments for now.’