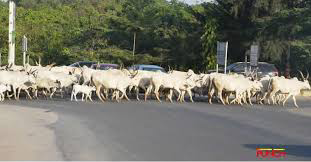 Taking a cue from lagos state and the southeast, the Delta State House of Assembly had also on Tuesday, enacted a bill for a Law banning Open cattle pasturing, careless Breeding, Rearing and Marketing of Livestock in Delta.

Similarly known as the ‘Anti Grazing Bill’, the enactment ensued after a motion for the 3rd reading by Ferguson Onwo, the Majority Leader of the House in a plenary in Asaba, the Delta state capital.

After the motion gained a unanimous adoption, it was subsequently seconded by Innocent Anidi, the Minority Leader of the Assembly.

Pat Ajudua, the Chairman of the House Committee on Special Bills, had earlier submitted the report on the bill to the assembly of the House, which was accepted and adopted.