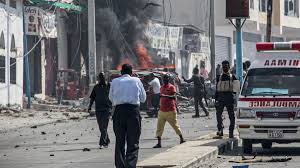 An enormous explosion has been reported close to the presidential palace in Mogadishu, the Somalian capital .

Onlookers said the detonation emerged from a car bomb that was close to a checkpoint leading to the presidential palace.

At the moment, an unknown number of fatalities have been recorded from the Saturday morning detonation, within El-Gab.

This explosion is coming at the time when the country is anticipating its second stage of its election process which is scheduled to commence on 1 October to 25, November 2021.

As at the time of filing this report, authorities have yet to issue a statement on the what led to the explosion.

In another reports, al Shabaab has taken responsibility for the suicide car bomb, noting that they were aiming a convoy carrying government officials.

Many vehicles have been damaged beyond repair in the blast.