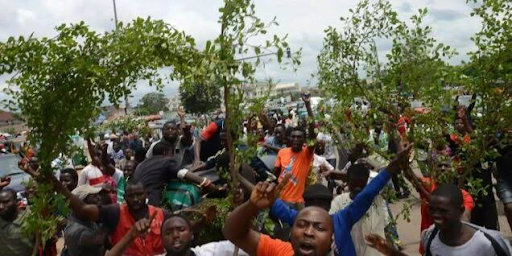 Residents of a community in Bayelsa, Biogbolo  have come out in high numbers to protest the sudden death of one Goodluck Oviekeme.

He died in the custody of the Nigeria police, Bayesa command.

Goodluck Oviekeme was arrested by the Nigerian police on Wednesday.

The rumour of his sudden death circulated  while in police custody.

According to a clear statement by the Bayelsa state  Police command,  Goodluck was arrested in connection to a robbery attack case that occurred, 21 September.

According to Asinim Butswat who is the  PPRO of the command, Mr Goodluck and other suspected hoodlums attacked the police patrol team on the 21st which is  the day that  the robbery incident took place. The hoodlums  fatally injured a police inspector called  Ugbotor Sunday and stole his rifle.

Police investigation alleged that, Goodluck was said to be the mastermind of the attack .

After the arrest of Goodluck, he  was observed to be running high temperature and was rushed to nearby hospital where he eventually died after some medical attention.

His brother, Ebitonye Michael, however, denied the police report,  insisting his beloved  late brother was innocent.

According to mr Ebitonye Michael, the Police special squad arrested the brother on Wednesday over a crime he did not commit neither did he know any thing about.

He alleged that his brother was killed at  the police cell and his body was later dumped at the Federal Medical Center (FMC) in Yenagoa, Bayelsa stste.

The angry Protesters, however, for several hours barricaded different roads in the community, leaving motorists and  commuters stranded which resulted in  halting of business operation in the area through out the day..