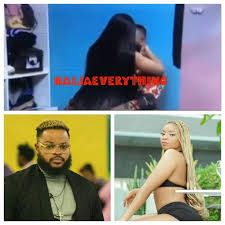 One of the Big Brother Naija Shine Ya Eye housemate, White Money, has ensured his love-crush, Queen that no one in the house can snatch him from her.

White money said this in the early hours of today, Saturday, 25 September 2021 as the two takin a rest in the garden after the Friday night Jacuzzi Party.

He noted that though they’re not wedded, he believes Queen should be devoted to him, since no housemate is in contest with her over him.

His remark came after Queen’s cozy times with some of the male housemates in his presence in the course of the Jacuzzi Party and he wasn’t pleased with that.

Queen had done something related the previous week and he warned her, saying that all her excess kissing was a foolish act.

Talking about the current happening, white money said; ‘It’s true we’re not courting and we’re not spouses. However, if you want to have me as your partner, no problem.

‘Since you said you wish to have such an affair with me, my sister, you will be concentrated. Now, as it is, I cannot say I want to lock lips with Angel or pull her boobs. No, i wouldn’t do all of that. As it is now, should loyalty be a person, you’re expected to be by my side.’

Responding to this, Queen said; ‘Really! so you now understand what loyalty means? Now you feel my pain. If only you feel the pain I went through couple od weeks ago.’

She was clearly drawing reference from White Money’s engagement with Jackie B before the latter got expelled few weeks ago.

Reacting to this, White Money said, ‘No pain at all. I am okay and not feeling any pain.

‘Do you have any contest now? Is there any one who wants to snatch me from you in this house? No one.’

White money then urged Queen that if she wants to get intimate with other guys, she should do that without his knowledge.