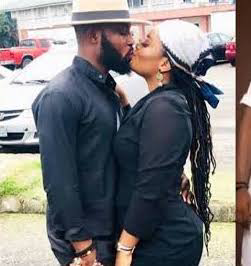 The dismissed Big Brother Naija, season 6 housemate, Tega’s husband has frightened to quit his marriage with her over her affair with Boma during her stay in the house.

Remember that Boma and Tega were dismissed on Sunday together with Michael and Peace after they obtained the lowest number of votes.

The removal of Tega and Boma’s from the house have been associated with their amorous bond in the house which was largely criticized.

However, the married Tega explained that her affair with Boma was a script to be played.

In an Instagram live interview with Tunde Ednut, her husband made it known that he would offer Tega another chance if she is humble enough to apologise to him.

He noted that he has no intention of letting Tega go if she owns up responsibility for her action in the house since this will be the first time she will be engaged in such an act.

‘No doubt, Tega knows what she did was awful but she needs us like never before. It won’t be nice that I should abandon her because she needs me.

‘ To err is human and to the forgiving divine. We all sin and God forgives us. So, i wouldn’t toss her away. Tega is my wife and such things come with a marriage relationship.

No marriage is perfect. For the past four years, we’ve not had issues in our marriage. I’m not sure I should forsake her now.

‘Now is the time she needs me more, should she returns and apologises and own up responsibility, I’ll forgive her but should she insists that her actions in the house were alright, then I’ll let go of her.’

He further implores Nigerians to put their family and marriage in prayer.