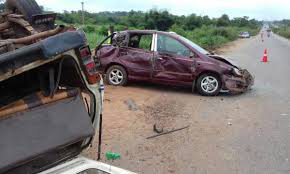 Report reaching us that An early morning head-on crash comprising a loaded tipper with sand and a commercial motorist has claimed the lives of four persons in Benin.

This unfortunate mishap happened at the Ogbelaka Junction on Sakponba Road, in Oredo LGA of the state.

SP Bello Kontongs, the PPRO of the Police Command in Edo, who verified the incident, said four people lost their lives, as against  the earlier reported nine by those at the scene of the accident.

SP Bello said three people died on the spot, while one gave up the ghost on the way to the hospital.