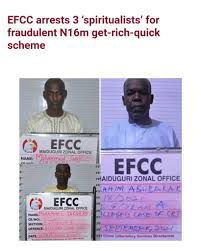 The officers of the Maiduguri Zonal Command of the Economic and Financial Crimes Commission(EFCC), have apprehended Mohammed Ibrahim, a self-proclaimed spiritualist,  and Ibrahim Abubakar, his abettor for supposedly duping one Mohammed Gaji of the sum of Sixteen Million Naira N16m in the pretense of performing spiritual prayers to make him (Gaji) rich.

Mohammed and his accomplice were apprehended at Sabon Bolori, behind the Chad Basin in Borno State, in the course of inquiry into a petition brought against Mohammed Gaji, claiming that he embezzled N22.2million entrusted to him by the petitioner, Mohammed Alhaji Bukar to create a cattle farm business.

However, insteas of investing the money as intended, Gaji gave Mohammed Ibrahim, the spiritualist N16m out of the N22.2m for prayers so he could get rich.