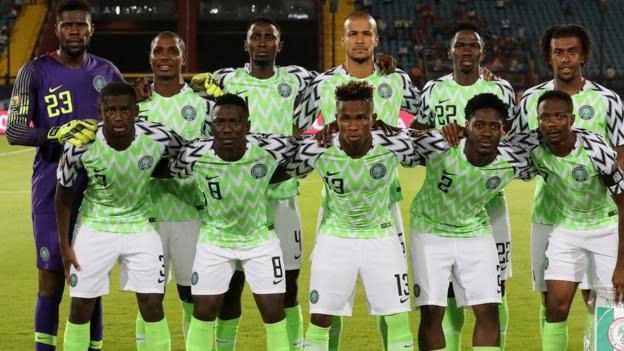 For the first time in nearly a decade, the super eagles of Nigeria played again in the Teslim balogun stadium in the 2022 world cup qualifier series.

Leicester City star, Kelechi Iheanacho’s first half seal against Liberia has given the Super Eagles a winning start in the 2022 World Cup campaign.

With Friday’s win at the Teslim Balogun Stadium, Coach Gernot Rohr’s players have soared high to the top of Group C of the 2022 World Cup qualifiers.

Opening the scoreline in the 22nd minute, Iheanacho drilled a low shot from outside the box which somehow crawled beyond the young Liberia goalkeeper.

In the 44th minute, Senior man as he is fondly called folded the home team’s lead with a soothing finish as he jealously manipulated a high ball right inside the six-yard box before he turned swiftly to fire past  Ashley Williams, the Liberia goalkeeper.

other chances were created by the Eagles, but Rangers midfielder Joe Aribo, who has pulled ahead of Oghenekaro Etebo, and Napoli striker Victor Osimhen failed to convert any away.

The last time the eagles knocked horns with Liberia was in 1975 which they won with a lone goal.

United Kingdom-based players will fly back to base after the match, while the rest travels to the island of Mindelo on Sunday night for Tuesday’s battle with the Blue Sharks of Cape Verde in a second qualifiers encounter.