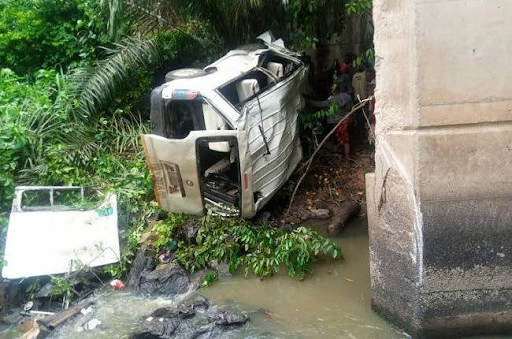 No fewer than four people have been reported dead, 13 others saved, while one person is yet missing as an 18-seater bus fell into the Black River, a tributary to River Niger in Kotonkarfe, Kogi State.

It was reported that the driver of the bus allegedly slept off and lost control when the inccident occurred at about 7.30pm on Tuesday.

Suleiman Mafara, the state Commandant of Nigeria Security and Civil Defence Corps, who confirmed this to newsmen in Lokoja said, upon the distress call, the officers of the Disaster and Crisis Unit, in collaboration with the FRSC and volunteer divers, were deployed to the scene.

Mafara said that 4 bodies have been recovered, while 13 travellers were rescued alive and One person is still missing, he said.

The commandant stressed that his officers and other sister security operatives were working to ensure the recovery of the only person yet to be accounted for.

Mafara also noted that the recovered corpses have been taken to a morgue in Lokoja.