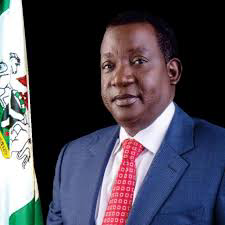 Subsequent to the recent killings in Plateau, Simon Lalong, the governor of the state has sworn that  his government would clamp down on anyone facilitating religious problems.

Governor Lalong made the announcement on Monday while briefing newsmen after an inspection tour and visit to some wounded victims of the clash which happened on Saturday.

It was recalled that there were clashes on Saturday morning in Plateau State, at Rukuba highway, Jos-North LGA  which took many lives leaving others injured in an incursion by armed men.

The Muslim Rights Concern, an Islamic group had indicted the Christians of being accountable for the invasions.

Governor Lanlong, after visiting the victims on Monday, cautioned against religious emotion, demanding that those concerned with circulating news that are fake be brought to book.

‘Religious crisis will not in any way be allowed a  in our state.

‘It’s about time People stopped the issue of transmitting false information. Most of the crisis that occurred is because that.

‘We are running after those people transmitting false information resulting to the massacre of people. That I can assure,’ said the governor.