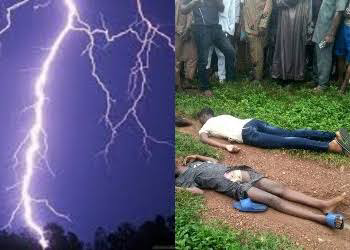 Reports have it that two unidentified siblings were knocked dead by the thunder lightning which attended a heavy rainfall on Sunday in Ikirun, Ifelodun LGA, Osun State.

Newsmen gathered that the unfortunate incident occurred at the Orisa-Elejin area of the community. The siblings were around the age of 14 and 16 years respectively.

The report has it that the two siblings snatched someone’s purse which was seen on the younger one.

An eyewitness who briefed correspondents on grounds of anonymity said, there was a certain sum of money in the purse when it was snatched.

‘The two children are siblings who stole a purse some days ago and the owner vowed to deal ruthlessly with whoever steals her purse. The two of them died as a result of the lightning this evening. The snatched purse was found on the smaller child.’