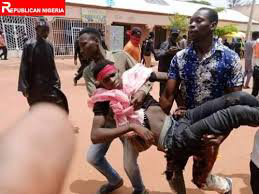 No fewer than two persons are allegedly dead in the course of an Ashura procession by members of the Islamic Movement of Nigeria [IMN], otherwise known as Shiites in Sokoto on Thursday.

Begining from Trade Fair on the famous Kano road, the parade went through NNPC, to Mahmud Gimi road with Madam Karo as their terminal for the procession.

The report has it that police officer charged at the Shiites and released tear gas canisters and live bullets at the bunch of mourners who were about to disband before their intrusion.

IT was gathered that two people were supposedly killed as several others endured a various degrees of gunshots wounds during the fight.

However, the prices my the IMN was a nationwide event including in the Federal Capital Territory, Abuja.

Beginning from Wuse, Zone 3 junction, the procession went round to end at Wuse Market in FCT, Abuja.

Abdullahi Musa, the Secretary, Academic Forum of the Movement,  Verified the event while briefing Reporters. He explained that two of their members were killed by security officers and 15 people were wounded.

He also said the state Governor, Aminu Tambual, and the police force,  should be concentrated on combatting the kidnappers and bandits destroying the NorthWest area rather than aiming at innocent women and kids.