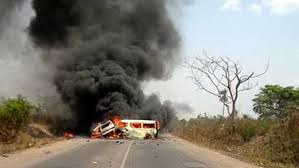 Trapped traveller said to have been burnt alive in Nkwogu–Ahiazu Mbaise Local Government Area, Imo State as the sit-at-home order called by the IPOB group went bloody on Monday.

Businesses activities were locked down in many parts of the state as citizens observed the order.

Schools were also sealed as students taking the ongoing NECO examination were hindered from sitting their papers.

Our reporter gathered that the deceased was inside one of the three vehicles that were set ablaze by a mob.

The two buses, all Hummer Buses, belonging to a famous transport firm, Libra, were coming from Umuahia, the capital of Abia State when they drove into a group of hooligans believed to be partners of IPOB.

It was reported that the tyres were shot at, and caused the bus to stop.

The occupants of the buses scurried to safety, as one of the drivers was said to have been shot on his hip.

The passenger could not break out before the bus was burnt down.

Our reporter likewise compiled that there was sporadic shooting within  Banana crossroad along Orlu-Owerri road as armed men confronted security operatives in a shoot-out.

A spokesman for the police, CSP Mike Abattam, declined his calls as at the time our correspondent attempted to reach him.