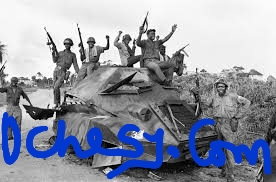 History will always remember that the Abagana Ambush of 31 March 1968 was one embarked on by Biafran guerrilla battalions, spare-head by Major Jonathan Uchendu. This attack put an end to the Nigerian 2nd Division. Out of the 6,000 Nigerian combatants attacked, just a hand full of soldiers survived, the 2nd Division’s commander, General Murtala Muhammad inclusive.

The Nigerian 2nd Division had on October 4 1967,  began shelling Onitsha and went on with the battle for eight days, before a 10 boat armada travelled the Niger River into the town. The dominating Nigerian troops failed to go after the retreating Biafran recruits instead, they settled to plunder and parch the Onitsha market to the ground. However, the Biafran 11th and 18th Brigades under the auspices of Major Joseph Achuzie and Col. Assam Nsudoh, cropped up a pincer and struck Onitsha from two strategic locations; capturing and executing many Nigerian troops.

The waves of this heat made the Nigerian 2nd Division and the 6th Battalion pass over the Niger River at Idah in December 1967 after which they advanced Onitsha, finally taking charge of the city after various trials. Now, the Nigerian soldiers aimed at linking up the 1st Division 2 at Enugu with the  Battalion at Onitsha. For this reason, the Nigerian Division 2 on 31 March 1968,  set out for Enugu in a long procession assisted by armoured cars.

That particular day being  31st  March,  1968, a convoy comprising about 106 vehicles owned by the Nigerian Division 2; transporting 6,000 soldiers, as well as weapons from Onitsha to Enugu, was attacked and destroyed in Abagana town by an insignificant unit of Biafran troops under Major Jonathan Uchendu’s leadership.

The Homemade Ogbunigwe rocket weapons were initiated by the Biafrans on a tanker vehicle transporting gasoline. This resulted in an immense detonation, razing some of the convoy’s armoured vehicles and killing a huge number of Nigerian soldiers. In that attack, not less than 350 tons of Nigerian Army devices were either destroyed or seized by the Biafran forces. After several rockets were launched, the Biafran fighters released fire and started shooting  on the convoy with smaller fire-arm, killing more Nigerian troops.

Following the recorded success at Abagana’s ambush, both the Biafran fighters and civilians gained hope in the war as well as halting the Nigerian’s progression into the Biafran region in the interim. As a result, Gen. Murtala Mohammed was eased of his command and that marked his end to commanding a division.

According to him, Uchendu said the scene of the convoy’s destruction nearly demoralized his troops. His men were so eager to open fire, more out of fear than courage. But he instructed them to tarry until he gave the command. He let ample of the Nigerian Division 2 caravan go through. His men were amazed at why he would let them go through into the Biafran clenched territory. They were worried and sceptical, yet they banked on his military bravery and so awaited to understand his technique. He said they assumed that the battle was over, but as fearless soldiers, they must combat to the finish!

In the bid to guide the soldier with the rocket launcher on what to do to the invading caravan and when the right to attack, the soldier mistakenly pulled the trigger, releasing the missile. Fortunately, it struck a fuel vessel. The vessel exploded and tossed its contents onto a nearby armour vehicle setting everything flaming with many detonations.

The Nigeria soldiers who already crossed over into the Biafran line ran In a panic to different paths in absolute confusion. The Biafran fighters fired on, transmitted signals to the regular troops and engaged in the invasion. Immediately Uchendu realized that Murtala Mohammed was with the caravan and somewhere in Nawfia, he hurriedly went after him to abduct him but was late as Muritala was spotted already flying in a chopper.