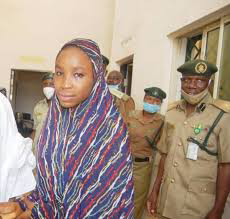 The Prison Reforms Committee and Decongestion have granted freedom to Rahma Hussein, a teenage bride found guilty of killing her husband 7 years ago.

Led by Justice Ishaq Bello, the committee also fostered the freedom of 30 other prisoners from various correctional centres in Kano state on Friday.

Rahma who was nabbed in 2014, was arraigned before a high court in Kano for stabbing her husband to death a day after their marriage.

In his judgement in 2018, Justice R. A. Sadik ruled that she should be ‘remanded at the pleasure of the governor of the state’ because she was given out in marriage out of her will and committed the crime at the age of 16.

In a briefing on Saturday, Musbahu Kofar-Nassarawa, the Public Relations Officer for the Correctional Centres in Kano,  verified Hussein’s freedom.

Musbahu said her freedom was ‘On the grounds of recommendation from the officials of the correctional centre who certified her good behaviour and industriousness.’

He also said, Abdullahi Ganduje, the governor of Kano state, who holds the power of prerogative of mercy on her judgement, was urged by the committee to assess the conditions that led her to commit the crime and grant her acquittal.

According to him, the governor listened to the advice and consented to her pardon.