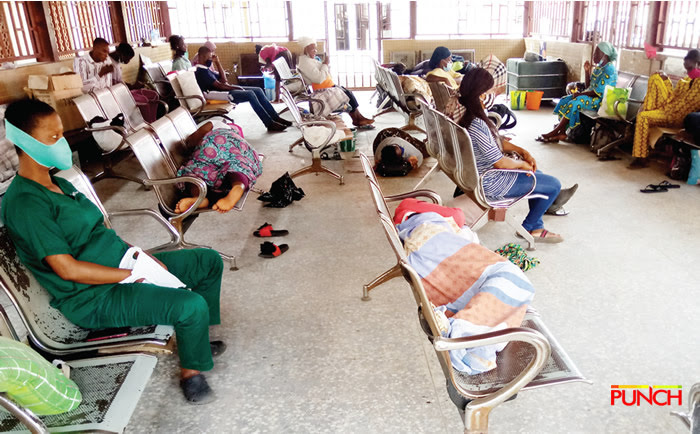 Millions of Nigerians in the last six days have been left without access to medical treatment occasioned but the ongoing nationwide strike embarked on by the Nigerian Association of Resident Doctors (NARD), while President Muhammadu Buhari keeps consulting with doctors in London, United Kingdom.

On July 26, President Buhari journeyed to London, United Kingdom to take part in the Global Education Summit on Financing Global Partnership for Education (GPE) 2021-2025 and see his doctors.

In his words, the presidential spokesman, Femi Adesina said, “the President will also spend some days for an earlier scheduled medical follow-up.

After attending the Summit, Mr. President will spend some days for an earlier scheduled medical check-up. He may probly be back by the second week of August 2021.”

This came almost a week after SaharaReporters exposed how the visit was  ‘secretly’ planned to avoid rampage or any “embarrassing protest” against the Nigerian President in London.

The National President of NARD, a person of  Dr Okhuaihesuyi Uyilawa had On 2nd of August, announced an indefinite strike action nationwide.

The doctors strike action came in the wake of the Delta variant of the COVID-19 pandemic in the country more so, at a time when President Buhari is in the UK for medical reasons.

Their demands are enshrined in a Memorandum of Action (MOA) ratified in April 2021 by the striking doctors, government representatives and the Labour and Employment Minister, Chris Ngige.

But the doctors’ association laments that the agreement, which had led to the suspension of a week-long strike earlier in April, had been breached by the government.

The labour minister, Ngige; also a medical doctor by profession was indicted for not paying adequate attention to doctors’ welfare.

The doctors had demanded the review of hazard allowance for health workers and the immediate payment of COVID-19 inducement allowance to some of its members in federal and state tertiary institutions.

The association also decried the hardship its members on the GIFMIS platform are facing due to the delays in remuneration ranging from three to seven months.

An announcement made  at the end of its national executive council meeting which held in Abia State, South-East Nigeria reads in parts; “The NEC noted that despite Government promise to relocate  her members from the GIFMIS to the IPPIS platform, they are still stuck on the GIFMIS platform which is laced with payment irregularities.”

The NEC noted with severe scepticism, the circular from the Head of Service of the Federation removing House Officers from the scheme of service and the resultant enactment by the Lagos State Government.

NARD also asserts that some house officers, who are fresh graduates from medical schools, are still owed between one to two months salaries, and that the NEC noted that ‘bench fee’ for outside postings by resident doctors has been revoked, nonetheless, some Chief Medical Directors have renamed the bench fee as training fee causing difficulty for our members.

Instead of having a dialogue with the doctors on Friday, Ngige said he invoked the “no work, no pay” rule.

“They will not receive money for the period that they are on strike and it will never count for a pensionable position in their career,” he said.

Asked if that was a reasonable stance, the Minister declared that “that’s what it is”.

“Even the ILO (International Labour Organisation) supports it because they (doctors) offer essential services,” he said, strengthening that they were not supposed to go on strike without notifying him 15 days prior.

Although he acknowledged that NARD sent him a communiqué of their meeting, detailing their demands and the resolution to go on strike, it was not the same as a trade dispute notice which he argues is what they ought to have served him.