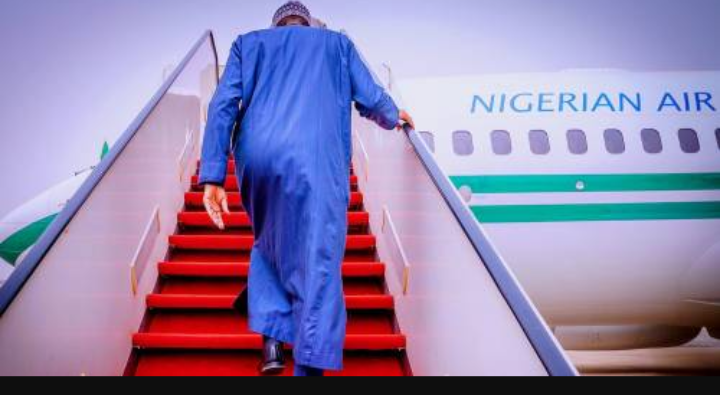 President Buhari had on 26 July made a trip to London in the United Kingdom to partake in the International Education Summit on Financing Global Partnership for Education [GPE] 2021 to 2025 and to consult his doctors afterwards.

The President is anticipated to return to Nigeria by Friday evening, authorities close to the presidency revealed.

Mr President had on 26 July journeyed to London in the United Kingdom to join in the International Education Summit on Financing Global Partnership for Education [GPE] 2021 up to 2025 and see his doctors.

The news came a few days after uncovering how his visit was scheduled secretly to avert spree or any awkward protest against President Buhari in London.

‘The presidential jet departed Stansted Airport, London, in an hour ago. Buhari is on his way,’ a source announced.

The President On had on Thursday,  visited the National Leader of the All Progressives Congress ]APC], Bola Ahmed Tinubu, who is recovering after another surgery in the United Kingdom.

The president and his family members routinely visit the UK for medical care in the surge of inadequate and poorly equipped clinics in the oil-endowed nation.

The Nigerian leader in March travelled to the UK for what the Presidency has interpreted as a routine medical checkup.

A controversy sparked off  as it occurred simultaneously with the strike by the National Association of Resident Doctors (NARD).

In registering their displeasure at the medical journey, many Nigerians seethed Abuja House in London where the President stayed, wanting him to pay back to the country.

From his assumption into office on 29 May 2015, present Buhari has undertaken medical journeys overseas for not less than five times, accounting for at least 180 days of his six years in office.

Below are timelines of the President’s journeys for medical care; between 5 and 10 February 2016, the President went on a six-day holiday in the United Kingdom, noting that his doctors resided in England.

In the period of  6 and 19 June 2016, Buhari took a 10-day medical leave to journey to England for an ear disorder surgery. The trip was extended by three days for him to rest.

The president was on 19 January 2017, back in London once more on a medical holiday.

Again, 5 February 2017, he applied to the National Assembly, asking for an expansion of his London medical outing. The president on 10 March 2017, retreated to Nigeria but didn’t begin work soon at the Aso Villa.

However, the Presidency had said that ‘Mr President was acting from home.’

Also on 7 May 2017, President Buhari got on a journey to London for another medical recess. He was back after 104 days; the highest he had stayed away from the country and office.

19 August 2017, Mr President retreated to the country but took him time to begin work because rats had allegedly destroyed the furniture in his office.

For that reason, the Presidency declared that he would be operating from home.

Also 26 April 2019, the president again went to the UK on a 10-day personal visit to pursue medical treatment. Buhari returned to Nigeria on 5 May 2019.

From 30 March to 6 April 2021, the President went on another outing for a regular medical review in London.