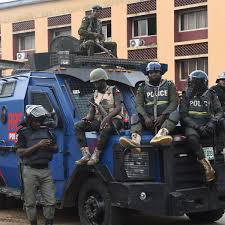 An organization called, Behind Bars Human Rights Foundation, has claimed that operatives of the Intelligence Response Team in Owerri–Imo State, apprehended and converted a young girl into a maid in detention.

The organization noted that the victim, Glory Okolie, a 21-year-old lady,  took the 2021 Unified Tertiary Matriculation Exam on June 17, and was arrested after the examination on the same day.

The DG of the group, Harrison Gwamnishu, stated this while briefing newsmen.

In his briefing, he said, Okolie’s family members had looked for her in hospitals and morgue but the search produced no helpful result.

Nonetheless, a young man who was freed from IRT detention told them that he saw the girl at the office cleaning and cooking for the officers after which the family moved to bail her.

The Director-General, Gwamnishu noted that the steps by the victim’s family to ensure the bail of their daughter yielded no result.

Gwamnishu said the organization’s inquiry, regardless, indicated that she had been taken to Abuja as a member of the IPOB.

However, the organization advised the IGP Complaint Response Unit Abuja and DCP Tunji Disu, the new IRT boss,  to begin a scrutiny io the matter and release the young girl.

According to the statement, ‘Miss Glory Okolie, a 21-year-old  who registered for the 2021 UTME has been in police custody since June 17th, 2021 up till now.’

‘Since 17th June, she left the house and never came back. her family had looked for her in clinics and morgue but weren’t able to find her alive or dead.

“About the edge of June, a young man who was freed from the IRT office, Tiger Base Owerri notified the Okolie family on how he saw Glory in the detention of IRT officers cooking and doing their laundry.

‘Immediately, the family  went to the IR office and asked to see Glory and possibly bail her out, but till now, it is one story or the other.’

‘Instead, the officials of the IRT went on to extort the family and deprived them permission to see their child. Our team initiated an inquiry and found out that Glory has been moved to Abuja and tagged IPOB/ESN element.’

‘The group, BBHRF, wants to bring to the awareness of IGP Complaint Response Unit Abuja and DCP Tunji Disu the new IRT boss to release Glory who has been converted to a maid in Nigeria police detention.’

‘herein are proof of all the cash defrauded and paid into an account given by the IRT operatives by Glory’s family.’ Garnish said in an application made to the IGP Complaint Response Unit Abuja and DCP Tunji Disu the new IRT head.