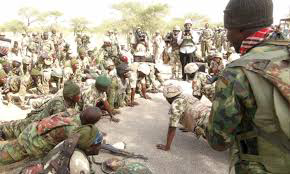 An operative of the Nigerian Army poured out his grief on social media after he was said to be brutalised by his former colleagues for trying to resign.

A clip shared online by Rita Edochie, a veteran Nollywood actress showed that the assaulted man claimed he has presented his resignation letter to his bosses and only waiting for payment of his benefits.

The ex-soldier noted that his boss refused to admit that he had quitted and gave order for others to beat him up.

He claimed that he was arrested, detained in 81 battalion guard room and ill-treated by his former colleagues on the orders of their boss.

The ex-serviceman said he had inquired what his offence was but didn’t receive any reasonable answer, saying that they instead kept hitting him, leaving him with a bleeding face and wounds all over his body.

‘My offence is what I really don’t know. Look at the injury on me. I was beaten up and detained without justification. See  the way I’m bleeding, see my hand, my entire body,’ He said.

‘I quit from the army willingly, with all sincerity. I did nothing wrong. I just informed him I’m no more serving in the army that I’m only waiting for my entitlement, and this is what I got.

‘They were ordered by the officer   to beat me up, my pregnant wife came but she was chased out and told that she was not permitted to come.

‘I was locked up by them, I lost appetite to eat; I found it difficult to use the toilet. Today, the 22nd day of August, 2021 see what they have done to me, see how they beat me up, I am at MRS now. Look at the way I’m bleeding, . Let the world see this, I want everyone to see it.’