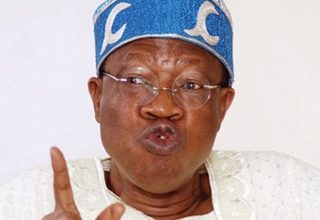 Alhaji Lai Mohammed, the Minister of Information and Culture,  says Nigeria can never be portrayed as a failed state, maintaining that the nation is only Experiencing insecurity in some areas of the country.

Mohammed, who insists that the country is gaining a victory in the war against insecurity, recounting that insurgents are renouncing their stand, given the increased attack from security operatives.

‘Nigeria is where I live, I serve in Nigeria and I travel all around Nigeria and I’ll boldly tell you that Nigeria is not a failed country,’ The minister told News reporters.

‘Quite true we may have problems with banditry, we have issues of separatist groups, but I can tell you that  it does not make the country, Nigeria, a failed nation.’

‘We are winning this war If what is occurring in the past couple of weeks is anything to go by.’

The minister, who implored Nigerians to acknowledge the government’s combat against insecurity In the country, pointed out that the nation’s security crisis I much better than what the current government inherited from the past administration.

Noting how the Taliban usurped government in Afghanistan, Mr Mohammed said that ideologies are hard to overthrow, a thing he says the current government has been able to deal with while combatting Boko Haram terrorist group.

In his words, before the existing government, Boko Haram governed an ‘A landmass territory equivalent to the size of Belgium’ which has now been regained to a small area.

‘The combat against terrorism is worth the people’s appreciation. The promising story is that insurgents today, are quitting in multitudes and we won’t relent in running after them,’ he said.