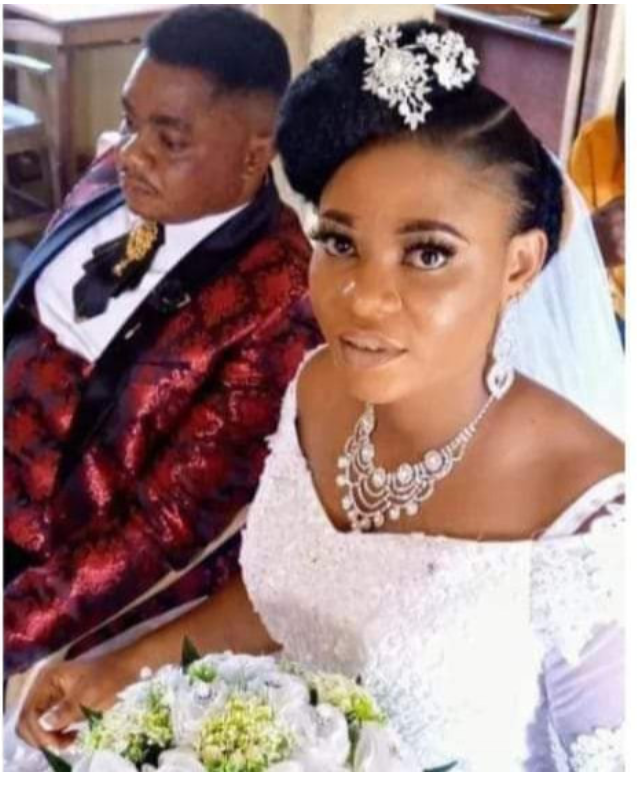 A lady who got married to a clergyman she met on Facebook without courtship, Happiness Nwakanma has come out to contradict the assertions by her estranged spouse.

My marriage to Divine Okoh happened shorter than one month after we met on Facebook and the marriage expired after just about three months, she said.

Details in the post reveal a man who married a woman within eight months of meeting. According to her, she said commented that her wedding will take place within one month of meeting her husand.

‘The poster sent me an inbox message on 30th March, inquiring if I meant what I said about marrying immediately which I replied in the affirmative,’ said Happiness.

on his invitation, On the day after, 31 March, she told newsmen that she journeyed to Agbor in Delta state from Port Harcourt to visit him. She passed the night with him in a one-room apartment where she intimated him about herself in the following morning.

Despite telling him that she is a single mother who got pregnant while in SS1, he insisted on marrying her and asked for either of her parents’ account numbers to send money just to prove his seriousness.

Happiness stated that when she got home, her mother argued she dates the prophet first which resulted in a fight that got the attention of the neighbours

Also, Happiness refuted Pastor Divine’s stand that she forced herself on him to getting married without dating by alleging her family doesn’t permit dating.

Saying also that the statement made by the Pastor about her mother asking him to come and see them alone, without his family is false.

My family then informed the Pastor that I’m a student and if he’s not prepared to finance my education, he should wait until I am done with studies before the marriage,’ Happiness narrated.

Happiness explained he insisted he needed to marry her immediately and will fend for her school needs, then got married.

Though, she told newsmen that she started seeing things he had concealed from her, which includes lying about his father as soon as they got married.

Happiness said that it was the pressure from her mother to see her in-laws before leaving that made the pastor to took them to meet his sick father who is suffering from a stroke.

Briefing newsmen, she said, “could you believe I’ve not for once seen his nakedness? Any time he wants sex, he made sure it’s usually at night and he’ll just move his underwear to one side. Should he needs to bathe, he goes into the bathroom with his clothes on and come out dressed too.

‘I have never seen my husband’s dick since he married me.’

She said when it was time for her to continue school came, she told Divine who rejected funding her education and asked her to go to her family to fund her.

Ever since, Happiness said he began abusing her verbally, saying to her that he made a blunder in marrying a single mother when there are many single ladies out there.

Briefing the press on their separation, she said she went on a visit to P/H to her family then he asked her family to attend his church in Delta state for a meeting.

Little did they know that he had some members with weapons waiting for them. On arrival with her mother, two uncles, and her sibling on 25 July, that they were severely assaulted by hid members who indicted her and her family for cheating their pastor. This attack caused her mother to bleed severely and her uncle was also hospitalised.

According to her, the pastor threw her out without some of her belongings and she went back to P/H alongside her family.

Since then, she said Divine has been terrorizing her life and that of her family, also denting her image

Warning single mums, Happiness said: “You rather marry a native doctor than marry a pastor– Divine is a fake pastor.”

‘I swear with my womb that all i said  are the truth.’ She added.