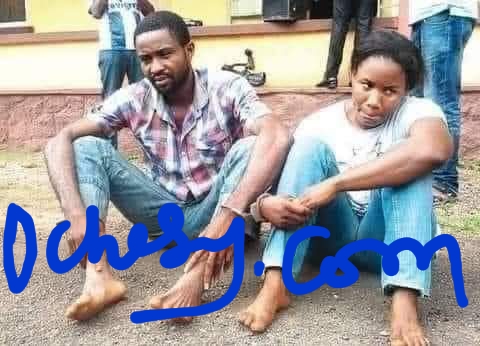 A Businessman, Ezekiel Igbokwe, 32, has been apprehended by  Ogun State Police Command for allegedly murdering wife’s lover, Victor Olatundun on their matrimonial bed.

Igbokwe was said to have killed his wife’s lover,  Olatundun after he caught them red-handed  having sex  on their matrimonial home.

The crime was commited on Wednesday 27th and the suspect was  arrested by the police on 28th, the following day.

The suspect, Igbokwe and his beautiful 28-year-old adultrous wife were among other crime suspects paraded at the Ogun State Police Command, Eleweran in  Abeokuta, Ogun state. The parade was done  on Thursday and the people paraded are those who committed  various offences. Some of their crimes ranges from murder to unlawful possession of arms.

The husband, Mr Igbokwe who said he was a businessman, narrated  that he returned from Onitsha and met the deceased, Mr Victor, on top of his wife at his own house,  on their matrimonial bed.

He further stated that  he picked his sharp  machete in their toilet and injures  the victim in the neck and hand which led to his death.

The wife’s lover, Olatundun,  died on the way to the nearby hospital.

Igbokwe who is the husband of the woman  is a busines man and he deals in electronics. He  said he is an igbo man but was born in Ago Iwoye, in  Ogun State Nigeria.

Igbokwe said, “I i embarked on a journey to Onitsha in Anambra state on July 25,  when I returned  back on 27th, I met Olatunde  inside my room having sex with my wife. We started fighting and I found out that he will end up killing me after sleeping with my wife. I decided to get my  cutlass in toilet.  I cut his   hand and neck. He was rushed but on the way to nearby hospital, the car fuel  finished and he could not make it.”

Mr Igbokwe said he committed the offence due to anger of seeing a man on his wife, adding that he never thought of killing the victim.

He however claimed that he do not know his wife’s lover and never met him,  Olatundun before. He further explained that  he had  never suspected his wife of extra-marital affair.

Mrs Juliet Igbokwe, who sobbed, said her lover had been seriously pressurising her for a relationship and he did that persistently for long time.

Mrs Igbokwe explained that she had always explained to him she was married, but the deceased never gave up until he came to their matrimonial home which was his end.

The woman who said her job is selling snuff, explained that Mr Victor was her supplier and had pestered her for atleast six months before she gave in.

She further said she suspected that the Olatunde (deceased) used  charm to get her, as she could not remember or explain how it all happened that made her gave in.

She said, “He had been disturbing that he wanted to marry me and treated me rightly.  I told him I was married already.

“On the night  of that incident, I really can not tell/say if he had used a charm on me. All I can remember is that i recieved his call that he wanted to see me. I told him never to come. I showed him our house before and when he came, I didn’t know what happened again.

“He delivered snuff  in our house before . On that day of the sad incident, he had  told me he wanted to come from somewhere in Ogun here. He said that it was already late and  wanted to sleep in our house till the next day. He was not aware that my husband was away. He made attempt of sleeping with me, but later he did not.”

Mrs. Juliet said that she got married to her beloved  husband in the year 2005 and her  husband did not take right  care of her and her  children.

She further stated that their marriage had been very uncomfortable and full of fights and quarrels. Juliet who have three children for the husband said each time there was quarrel between them, her husband would leave  house for months before returning.