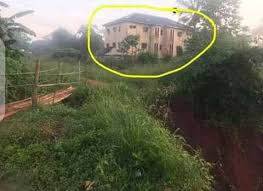 A house was discovered sometimes ago and was named  “HOUSE OF DEATH IN AFRICA”.

This name, “House of death in Africa” was used because of the unusual activities in the building that was reported by a Blogger, Mr Ejike.

According to him, the said House of death in Africa is  belonging to countless numbers of gods in an Igbo community in imo state, Nigeria.

The community in which the said house of  death in Africa was discovered is called Amaigbo Umu-Anu . In a report circulating social media, the mysterious house was reported to belong to no man of the society and the builder or the real owner yet to be known.

In another wired  report, it was said that no human lives in the house and no electricity connection but at night, light illuminates all around the building. It was further stated  that no gate/entrance into the house.

Accorsing to the report, a young man, Ebuka Ikechukwu in 2012, was inquisitive to see  inside the “house of death”. He was said to have jumped in through the fence but did not make it back.

In another wide reports,  clothes dried outside  within the house also changes colour. In the year  2005, it was also stated that  a pregnant  woman was standing close to  the window of the house of death  crying, with blood all over  her body. The window was closed back and it was said that till date no one knows where about her.

New separate report springing says,  “house of death in imo state, Nigeria is a fabrication by one Ebuka, a blogger to draw the attention of government to an erosion in the community where the said “house of death” is located.

In a video posted in Nairaland media, the chairman of the community was seen with other people as they opened the entrance of the house and entered. Contrary to the circulating story about the house, there are occupants who were interviewed. They all debunked the rumour and tagged it as “mere false report”.