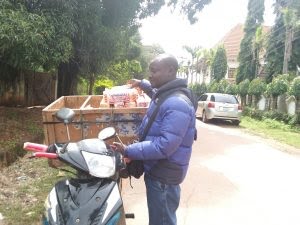 Ali Dahiru, a graduate of polytechnic in Kaduna, who quit his Banking job for the bread business,  says his action has become a blessing to him.

The Higher National Diploma holder, Dahiru, who finished from Kaduna Polytechnic in Cooperative Economic and Management discipline, reveals that he sold bread on the streets of Kaduna, and was happy with his business.

‘For six years  after my graduation, I operated as Banker in zenith bank plc as Casual Staff before I stopped and began bread businesses.’

Speaking on his fantasy with the bread trade started, He said a man who was supplying bread to the bank where he worked, stirred his interest.

‘While on my annual leave, I chose to discuss with the man who vends bread to us in the bank, showing my interest in the business.’

“Already, I discovered that what he gained in vending bread was far better than my monthly salary at the bank.”

‘The bread vendor tried to dissuade me on the position that as an educated person, bread-vending was not something I should think of, but I maintained my decision.

‘Eventually, I quit from the bank and began selling bread on an automobile – ‘OKADA’, to the shock and disappointment of some people,’ said Dahiru.

Dahiru noted that his economic status had now increased, more than when he was with Zenith Bank as casual staff, Stating that he was now in a situation where he can give financial assistance to people in need of it.

‘Never at any time have I been ashamed of being a bread vendor as a graduate; people who display themselves as graduates and do not have a means of earnings do ask for help from me; I think they should be ashamed of themselves, not the other way round.’

His only problem according to him, is the way of delivering the bread to clients, saying the motorcycle currently in use, is insufficient.

‘The motorcycle I use cannot carry a huge number of bread to satisfy the need of my buyers; most times I’ve to go to the bakery for about three or four times, and before I am done with my supply, the bread would have finished from the bakery before my return,’ he said.

He also advised all young graduates to take on lawful businesses, regardless of how little it is, he also encouraged the youth to always “do things according to their abilities.”